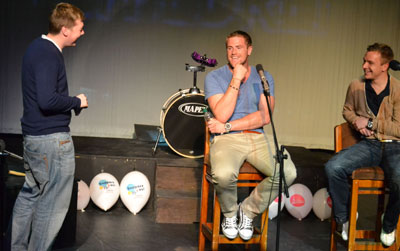 A packed theatre was greeted outside in the garden for a drinks reception with music from Skerries trio Georgia O’Sullivan, Sarah Montcalm and James Lonergan before heading into the night’s entertainment.
The night was MC’d by organiser Jack Hanratty and began with another Skerries act – Paddy McNally and Grainne Kelly – followed by Rush native Tara Harrison.
Brian Hosford was next up with a beautiful rendition of “Raglan Road” then Shay Dempsey finished the first half with a comedic twist to his mellow music.
At the interval the Heineken Cup was the main attraction before the second half started wtih Ross Munnelly (Laois footballer and former International Rules tourist) and Jamie Heaslip (Leinster, Ireland and British & Irish Lions rugby player) where the audience had the opportunity to hand up questions to the sports stars.
The interviews were extremely light-hearted which everyone, including the sporting duo, seemed to enjoy. Heaslip was so impressed on the night that he donated the jersey which he wore in the Heineken Cup final for auction.
Niamh Kavanagh, accompanied by her father Barry, continued the musical theme before Skerries band, “The Plums”, who were formed especially for this event livened up the crowd just before the end of the show.
Organiser Jack Hanratty said: “Local and national business got behind this night and it was extremely emotional seeing the full house. We made a considerable amount of money which was the main goal, but everyone seemed to enjoy themselves. So roll on next year!”
Over €;4000 was raised through sponsorship and attendance which will go a long way in supporting the hospital.
The night ended with all acts joining together for a rendition of Mundy’s famous “July” and all enjoyed and look forward to seeing “Party Pieces 2” next year.