Heaslip rolls up his sleeves for GOAL in India… 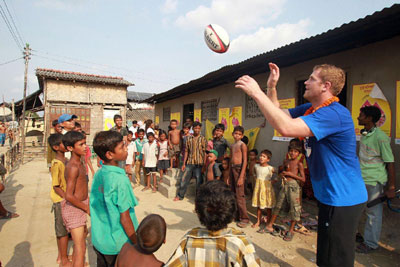 Jamie Heaslip travelled recently to visit some of GOAL’s projects in Kolkata, India, and has admitted that working for a short spell at one of the many brick kilns dotted around the outskirts of the city was probably the toughest manual labour he has ever undertaken…

The Leinster number eight had expressed his wish to toil alongside some of the poor that benefit from GOAL’s programmes in order for him to get a better understanding of their plight.

Heaslip shovelled clay, pushed wheelbarrows full of mud and carried and stacked bricks for hours in intense heat at one of the 35 brick-making factories on the outskirts of the city where GOAL is delivering aid. Entire families, including children as young as five years of age, work at the kilns from dawn to dusk, moulding thousands of bricks for as little as €;1 a day.

“In a situation like that, I don’t like standing by and just watching,” Heaslip explained. “It’s just part of who I am. Getting stuck in there gave me a sense of realism which I wouldn’t have had unless I got involved.”

Although Heaslip did roll up his sleeves for a number of hours, he admitted that the efforts he put in were nothing compared to what the people there have to endure on a day-to-day basis.

“I only scraped the tip of the iceberg, really,” he said. “Physical labour is physical labour, but it is the conditions at the kilns that make it so, so hard. There is no air-con; there are no union breaks; these people slog from dawn to dusk under intense heat and humidity. It was so hot there that I was going through about five t-shirts a day.”

Heaslip saw how GOAL is providing families at these 35 kilns with essential water and sanitation services and access to basic healthcare and education services.

“When you see what the families have to endure every day, you really begin to understand how important a good education is,” he said. “The children at the schools I visited are the first people in their family to learn to read or write. That is a tool that their parents would not have had, so straightaway, GOAL is providing them with an advantage in life, giving them an extra chance to escape this kind of poverty”.

Apart from the kilns, the players visited some of the city’s dumps, where GOAL is providing essential assistance to families forced to scavenge amongst the rubbish for anything they can sell for food.

“The conditions at the dumps were horrendous,” admitted Heaslip. “The smell was overpowering. It was just awful to see small barefooted children sifting through the rubbish for items that could be recycled.

“Again, education is being provided here by GOAL, as well as basic healthcare, and water pumps and clean sanitation, all of which were being fully utilised. We take things like clean water for granted, but they are crucial in these places to combat disease and bad health.”

Jamie also visited a rehabilitation centre for children, where GOAL is supporting the manufacture and supply of orthotics and prosthesis to physically-challenged children in need.

He even managed to impart some rugby skills to a large band of very enthusiastic children along the way.

“I really enjoyed the experience and it has certainly given me a better understanding of the kind of assistance that GOAL provides across Kolkata. I really like the way they operate. They go into an area, see what the people need and make sure that they get it, whether it is water, health services or education.

“It is a very simple, practical and business-like approach and, as I have seen for myself, very, very effective”.