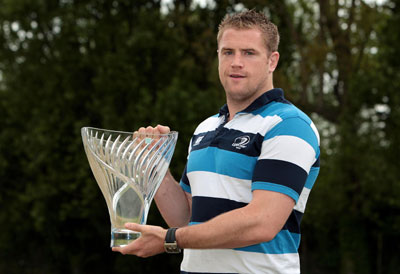 Jamie Heaslip has been named the Bank of Ireland Leinster Player of the Year at the annual awards ceremony in the Burlington Hotel, Dublin on Friday evening…

Heaslip has played an influential role for the province in 18 appearances to date this season and has been a standout performer in Leinster’s Magners League and Heineken Cup campaign.

Commenting on his award, a delighted Jamie Heaslip said: “It is a huge honour to receive this award and I’d like to thank Bank of Ireland for their generosity. I don’t think I’ve ever received an award of this stature before on an individual basis and I wouldn’t like to take too much credit because I couldn’t have achieved this without my team-mates and coaches.

“The way the Leinster squad has been managed this year has kept guys fresh for every game and that has affected me positively, touch wood. It’s also down to Cheiks’ (Michael Cheika) ability to rotate the squad, the fitness coaches for keeping us fit and healthy, and everyone on the squad pushing each other because of the competition that’s there.

“We have a huge test coming up next weekend against the Ospreys and it will be another massive battle up front. They have an array of talent out wide so we will have to up our levels again next week. There’s no sense of our season being complete even though we were pleased to beat Munster in the semi final. While it’s humbling and I’m extremely grateful to receive this award, I hope that it won’t be the last one for this season.”

A number of the departing players and coaches were honoured as was Shane Jennings who recently passed the 100 cap milestone for his province, while Head Coach Michael Cheika received a specially commissioned painting on behalf of Leinster Rugby and Bank of Ireland for his outstanding contribution to the province over the last five years.

Former Leinster and Ireland great Paddy Madigan was inducted into the Guinness Hall of Fame to honour a lifetime’s involvement at all levels of the game. Educated in Belvedere College SJ where he collected five Leinster Schools caps, after leaving school he joined Old Belvedere and rendered outstanding service to the club and played a major role in the club’s victory in the Leinster Senior Cup final in 1968. He won his first Leinster cap in 1964 and made 15 appearances for the province.

After he retired as a player, he served on the Old Belvedere executive and was President of the Leinster Branch in 1976/77 and was a member of the Leinster selection committee. An Ireland selector from 1978 to 1981 and chairman of the selection committee in 1980/81, he was manager of the Ireland team that toured South Africa in 1981. He was a member of the IRFU Executive Committee for well over a decade and was president of the Union in 1987/88. The first chairman of the IRFU Sponsorship Committee, he still works tirelessly with the IRFU Charitable Trust. On and off the field his contribution to the game has been immense.

Fresh from leading the Ireland Under-20’s to Six Nations success, back-row forward Rhys Ruddock picked up the Powerade Young Player of the Year award in his first season in the Leinster Academy. The 19-year-old made his senior debut for the province in December and has played three times so far in the Magners League.

Isa Nacewa received the Comans Wines Tackle of Year for a tackle made on Niall O’Connor during the St. Stephen’s Day victory over Ulster in the RDS, while Gordon D’Arcy picked up the Try of the Year award for his effort in the 30-0 Magners League victory over Munster in the RDS, as voted for by readers of the Evening Herald.

In what was another remarkable year for Leinster Schools rugby, St. Gerard’s School picked up the Powerade sponsored School of the Year after making impressive strides in recent years.

The Philips Ladies Player of the Year went to Blackrock, Leinster and Ireland scrum-half Tania Rosser who has been an outstanding ambassador for the women’s game over the last number of years. Tania continued her excellent run of form over the league and interprovincial campaigns this year and is a deserving winner of this prestigious accolade.

St. Mary’s College, meanwhile, have had a tremendous season, not just at Senior level but throughout the club where they have competed at every level and in the process picked up four Leinster Branch trophies ranging from Under-21’s up to J2 and are worthy recipients of the Canterbury Senior Club of the Year. The Senior side demonstrated a remarkable spirit before going under to Cork Con after extra time in the AIB League Division 1 Final; the huge colour and support they brought to the occasion was the abiding image from a truly memorable day in Athlone.

Canterbury Junior Club of the Year Seapoint went unbeaten in winning the Leinster League for the second time in their history. It was an extraordinary achievement in an extremely competitive League that was played on a home and away basis for the first time. They backed it up by winning all three Round Robin games to gain promotion to the AIB League, a most timely accomplishment as the progressive Killiney based club celebrates in 75th anniversary this season.

Bevan Duffy picked up the Paul Sheeran Club Player of the Year after being an integral part of Boyne’s Newstalk Provincial Towns Cup winning team; a notable triumph for the Drogheda club who won the coveted pot for the second year in a row. The accomplished centre was also the stand-out performer in the Leinster League as his club finished runners up to Seapoint while he made a vital contribution to Leinster winning the Junior Interprovincial for the third year in succession.

Clondalkin’s Jonny Stapleton set the benchmark this year by consistently promoting his club to a variety of media with fresh and innovative content and his voluntary efforts were rewarded with the Evening Herald Public Relations Officer of the Year.

Des Cahill was the Master of Ceremonies on a successful night which saluted an outstanding year for the game of rugby in Leinster.

Bank of Ireland Player of the Year
Jamie Heaslip