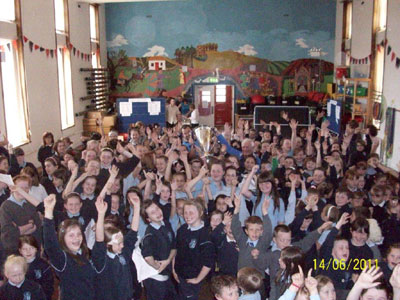 The reception in every school was incredible for this magnificent trophy.

The Mercy School in St. John’s Road Wexford was one of the first schools visited and what excitement by this predominantly girls school – both from teachers and pupils alike.

Wexford are proud of the fact that not only did Gordon D’Arcy begin his rugby career in the town, but the entire Leinster squad conducted their pre-season for the 2010/11 season in the county as well.

Consequently there is an enormous Leinster Rugby following in the area by young and mature people.

Gordon will be appointed Ambassador for Wexford Rugby in Dublin later this week, which is another great honour for all involved.

But the scenes witnessed in all the Schools where the Cup was displayed will take some beating for years to come.