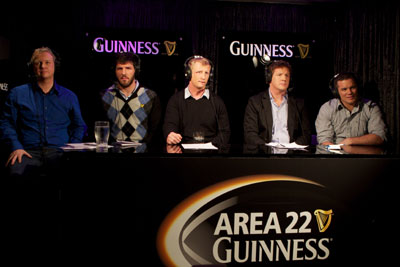 Ireland International duo Shane Horgan and John Muldoon top the bill for the next Guinness Area 22 Event on Thursday, 6th October which takes place at The Odeon, Harcourt Steet in Dublin, to preview Ireland’s Quarter Final clash with Wales…

Horgan and Muldoon both featured for Ireland last year before respective injuries put and end to their ambitions to head down under with the current squad. In addition, joining host Matt Cooper on the panel will be former winger Denis Hickie.

The event will feature a new edition to the Area 22 supporters’ nights as Guinness has teamed up with Today FM and the SKY Pub Channel to feature two live broadcasts on the evening.

The first half hour of the event, from 6.30pm to 7pm, will be broadcast live on the Last Word on Today FM.  Following the Today FM broadcast a second live show will take place as the stage is transformed for a SKY Pub Channel transmission between 7pm and 8.30pm.

Rugby followers throughout the country that are unable to attend the event at The Odeon will still be able to view the show on the SKY Pub Channel 881 at their local pub.

Supporters interested in attending this event should register now at:

Tickets are free. All those attending must be over 18 years of age.
ID will be required on the night.

For further event details, check out: