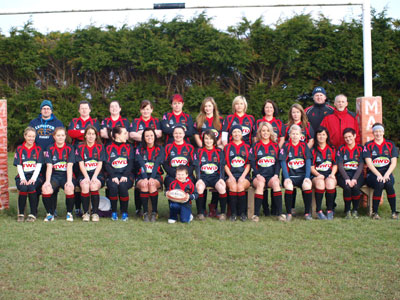 Up first was The Arklow Jaguars (Under-17 ladies) side which took on Tullow as a curtain opener for the senior ladies game. Supporters were treated to end to end rugby by both teams. In the end Arklow Jaguars ran out winners 35-17, a remarkable achievement given they were only formed at the end of 2010.

Next up The women’s senior team Arklow Amazons took on the Gorey Ladies winning 12-10 in a last minute scheduled encounter (after the cancellation of an earlier fixture against Mullingar). To state that this game was end-to-end is an understatement with some premium rugby played by both sides. The game was very tight with the slightest mistake made by either club being punished. In the end it was the trade mark hard tackling by the Amazons that saved the day.

Ladies Day takes on a new meaning in Arklow Rugby Club now as both the Jaguars and The Amazons show that the Ladies are now a force to be reckoned with. Both teams train in the Oval on Wednesday night with the Amazons also training on Friday nights. Both teams are always looking to welcome new members. Training start at 7.30pm …why not pop along and see what this exciting side of rugby is all about.