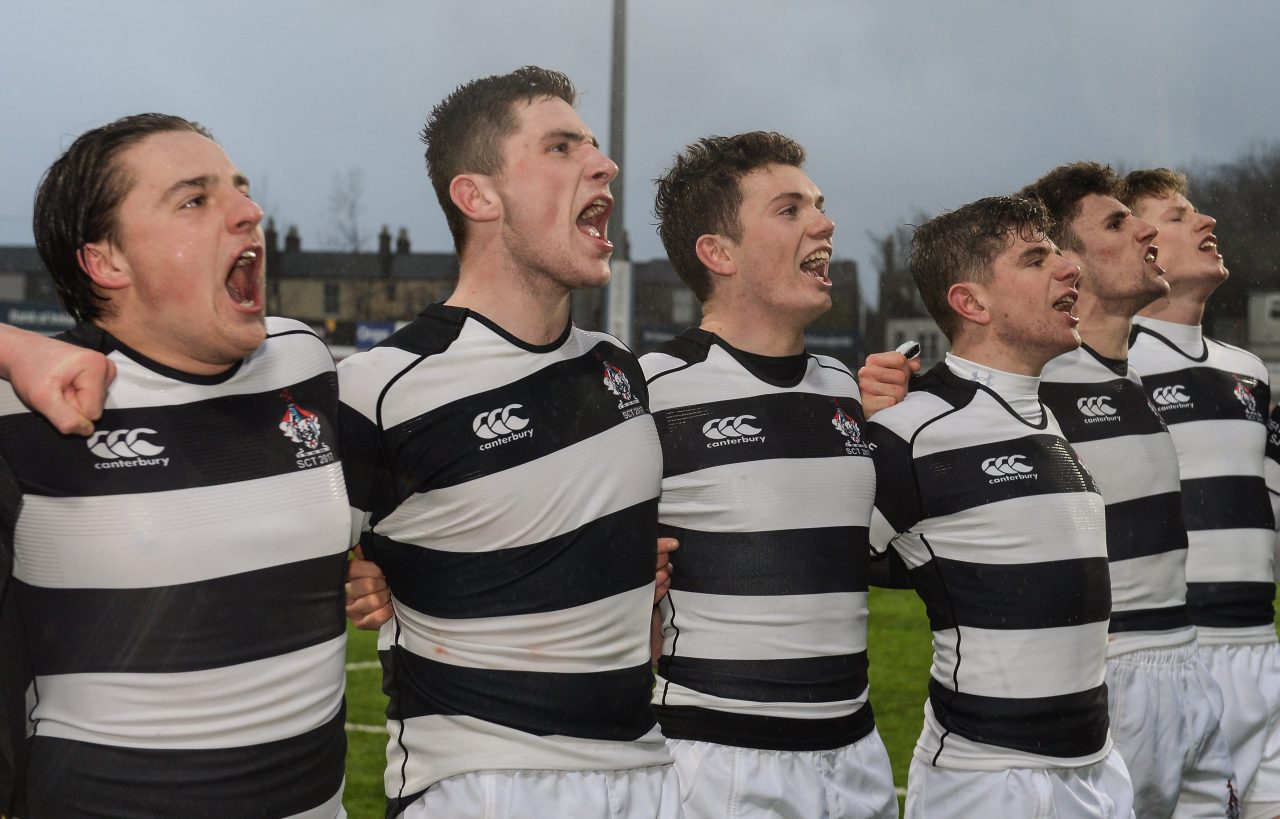 St Michael’s were straight into the pace of the game, their maul just coming up short when lock Ryan Baird and scrum-half Peter O’Beirne were stopped in their tracks.

Belvo went to their pick-and-go into the wind only for lock Jack Dunne to poach a penalty for Harry Byrne to land a seventh minute lead.

The champions almost struck back when wing Mark Donnelly was foiled by a bobbling ball into the right corner.

The northsiders began to make a breakthrough at the breakdown for two penalties with flanker Max Kearney prominent.

A lapse in concentration from St Michael’s allowed full-back Hugh O’Sullivan to bounce back to his feet when not held in the tackle for the first try, adding the conversion for 7-3 in the 15th minute.

They came calling again for out-half David Hawkshaw to slip a grubber through and left wing Jordan Wilkes had the composure to control the ball for 12-3 in the 19th minute.

St Michael’s were taking hold of the lineout and out-half Byrne was spotting and taking space to force a penalty which he nailed for 12-6 in the 29th minute.

The glue-like groundwork of Kearney was causing endless problems for St Michael’s continuity.

When Hawkshaw charged hard, Byrne and Jack Dunne were there to meet him.

Michael’s lock Baird made up for a high tackle by leading the line to conclude the half.

The Aylesbury Road school would have to come from behind playing into the strong wind and rain.

They looked to go wide too early and from too deep to invite pressure.

When Belvo got their hands to the ball, they were more inclined to play the conditions, showing patience to create the opening for number eight Ruadhan Byron to power to the base of the right post.

O’Sullivan shot the conversion for 19-6 in the 40th minute.

St Michael’s got straight back to basics for wing Jeff O’Loughlin to do well and replacement prop Alex Deegan to show good hands.

Centre Michael Corcoran was the victim of a high tackle and they went for the corner.

Second row Baird gathered in the lineout and hooker Stephen Judge couldn’t ground the ball over the line.

They were more ruthless from the ensuing scrum when the ball was moved left for second row Jack Dunne to crash over for Byrne’s conversion to make it a six-point game in the 46th minute.

It took another turnover from captain Kearney to put Belvo back on the front-foot.

They looked dangerous until Baird and David Ryan kept hooker Sam Osborne on his feet for a turnover.

Centre Ryan and Baird then showed what they could do with the ball in what was turning into a sensational contest, despite the weather.

Then, Belvedere flanker Conor Doran was binned for a late tackle after the whistle.

Yet, St Michael’s were caught short of numbers at a ruck when the ball went on the floor.

They coughed up a penalty and O’Sullivan was on hand to make them pay for 22-13 in the 59th minute.

TRY @stmcrugby!
What a response from Michael’s. Rob Russell touches down in the corner. Four in it! #LSSC https://t.co/iXX5A0DdzR

It all came down to Hawkshaw’s interception of O’Beirne’s pass under pressure for O’Sullivan to make it 29-18 in the 67th minute.