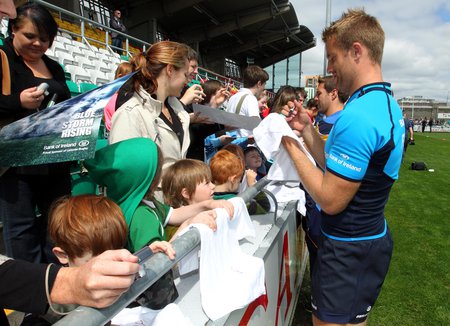 The Leinster squad continued their pre-season preparations with a hugely successful Open Day in Tallaght Stadium on Friday afternoon which was attended by over 2,000 supporters…

The squad went through their rigorous training drills in front of the impressive gathering and afterwards the players signed autographs and posed for photos. Leo the Lion also proved to be a hit off the field, meeting supporters and posing for photographs as the crowd enjoyed the fine conditions.

Leinster will travel to Longford RFC in a fortnight’s time (Friday, 5th August) for the second Open Day of the 2011/12 season. The action starts at 11am and admission again is free and open to all.

Leinster Rugby has undertaken a series of pre-season Open Training sessions across the length and breadth of the province and have visited the likes of Boyne, Clondalkin, Edenderry, Kilkenny, Malahide, Mullingar, Portarlington, Portlaoise, Tullamore, Wexford Wanderers and Wicklow in recent years.

Tickets for the two Bank of Ireland Series fixtures, against Southern Hemisphere Super 15 opponents Melbourne Rebels and the repeat of the Heineken Cup final against Northampton Saints are on sale HERE