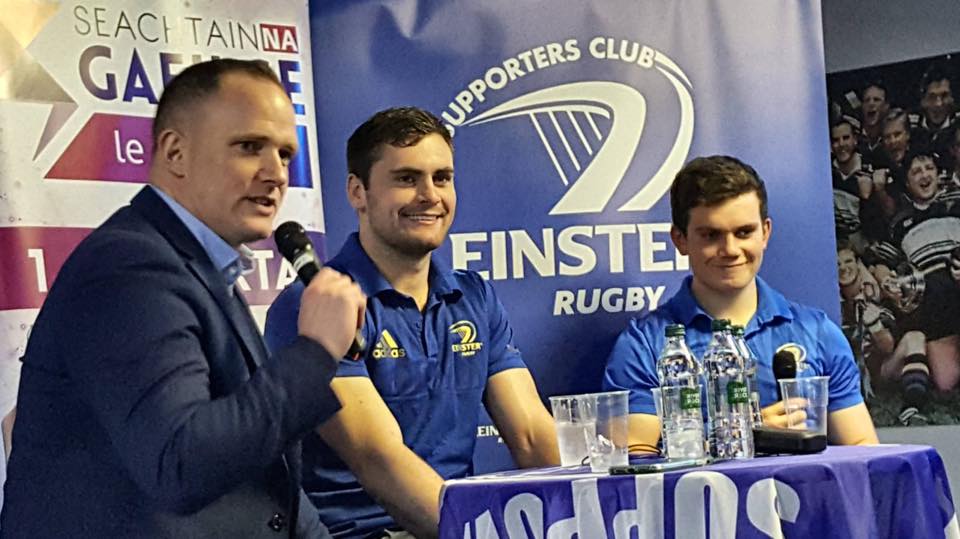 The Laighin Out Bar was lively after our victory over Toyota Cheetahs last Friday night as the result qualifies Leinster Rugby for a home Guinness PRO14 semi-final.

The OLSC were joined by Seachtain na Gaeilge sponsor Energia for a player Q&A and a pop-up Gealtacht. Visitors to the Laighin Out on the night included travelling Cheetahs fans, Toulouse fans, Leinster Communications Manager Marcus Ó Buachalla and of course Academy players Hugh O’Sullivan and Conor O’Brien.

Hugh and Conor both played a part in the win over the Cheetahs with Hugh appearing from the bench and Westmeath man Conor starting and dotting down for his sixth try of the season.

Conor, a graduate of St Finian’s College, Mullingar developed as a player through the club system with Mullingar RFC. Conor was also part of the successful Midlands team that won the Shane Horgan Cup in 2012. In the same season, Conor also played out-half in the Mullingar U17 team that won the Culliton Cup.

Hugh developed his rugby through the school system having attended Belvedere College, where he was part of back-to-back Leinster Schools Rugby Senior Cup winning sides in 2016 and 2017.

The OLSC handed the mic over to Marcus Ó Buachalla who interviewed Hugh and Conor in English and as Gaeilge. Much was made of the players’ Irish language skills, with speculation that they might be in line for many Guinness Man of the Match awards in games covered through Irish.

It was apparent that the players were well able for some craic i nGaeilge, however, both admitted that the musings of academy teammate Jack Dunne on theoretical physics left them a little bewildered – and who could blame them!

The players discussed how Celtic Cup rugby prepared them for the step up to PRO14 and European rugby, commenting that the pace of games and lack of space were their biggest challenges to them as young players.

To prepare them for this step up, both players spoke about the quality of coaching at Leinster. To illustrate the point, the attention to detail and analysis work of Felipe Contepomi was highlighted. Hugh and Conor agreed that the coaches pointing out small areas of improvement can make a huge difference to players.

The OLSC on behalf of all supporters would like to thank Hugh, Conor and Marcus for their time. Supporters and players can look forward to a PRO14 home semi-final and, of course, the Heineken Champions Cup quarter-final against Ulster at Aviva Stadium on 30 March. Click here to see more photos of the night.