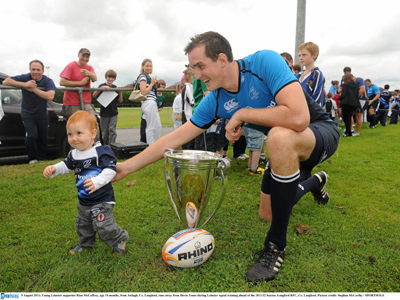 After the rigorous training session in the wonderful Midlands facilities which were only recently re-opened, the squad happily mingled with supporters – signing autographs and posing for photographs.

Late last month over 2,000 supporters packed into Tallaght Stadium to watch the squad prepare for the start of the Bank of Ireland Series.

Meanwhile, Leinster Rugby has undertaken a series of pre-season Open Training sessions across the length and breadth of the province and have visited the likes of Boyne, Clondalkin, Edenderry, Kilkenny, Malahide, Mullingar, Portarlington, Portlaoise, Tullamore, Wexford Wanderers and Wicklow in recent years.

Tickets for the two Bank of Ireland Series fixtures, against Southern Hemisphere Super 15 opponents Melbourne Rebels and the repeat of the Heineken Cup final against Northampton Saints are on sale HERE