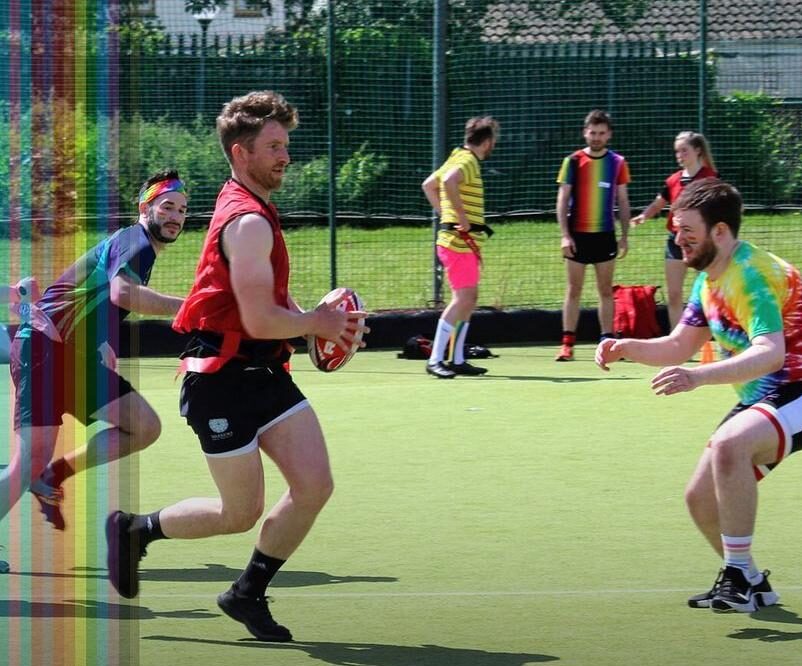 Evan Somers is a changed man. For now.

The freedom of expression and movement the 23-year-old gay man enjoyed before the early hours of Sunday morning, 10 April, was cruelly expunged with an unprovoked, violent assault, leaving the innocent in St James’ Hospital with a fractured right eye socket and a shattered, dislocated left ankle.

The degree of force meant the fractures to the ankle were many and the period of rehabilitation is estimated at anything up to 18 months.

Emotionally, travelling back in time to that moment of madness is a pain Evan is willing to endure as long as it comes as a cautionary tale for others in the LGBTQ+ community.

It is a theme that the Chair of the Inclusivity Committee in Leinster Rugby, Moira Flahive, also touched upon only a few weeks ago. The worrying prevalence of these horrific, unprovoked attacks.

“Unfortunately, you have to have your wits about you in Dublin, especially at night time in the city centre. Once those clubs and pubs close, it turns into a free-for-all when people are put out on the streets at the same time,” says Evan.

“When you walk through the streets, the amount of people you see fighting and getting assaulted is insane.”

The sort of incident Evan had been a witness to was visited on him without any known reason other than his sexuality.

There is a rainbow coloured cross-walk near The George, a long time social haven for the LGBTQ+ community.

Evan was encouraging his cousin to take pictures of him walking across it like he was one of the ‘Gay Beatles’ on Abbey Road, the album cover.

“After that, for all I know, I was skipping down the road, singing Britney Spears. I really don’t know why I was targeted,” he laughs.

“Anyway, my cousin and her boyfriend were walking down Dame Street, trying to get a taxi, which was almost impossible. 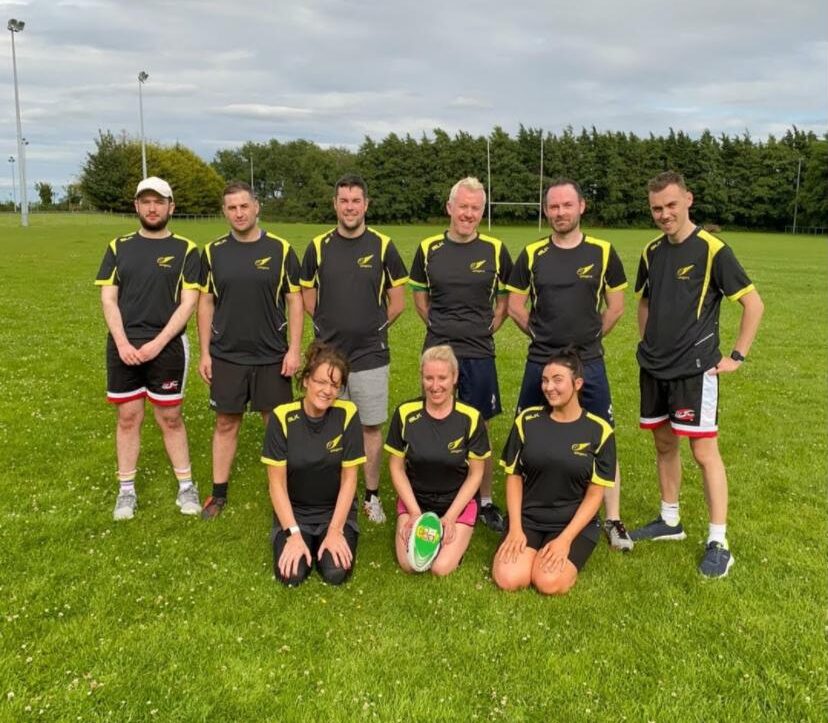 “This fella I had never seen before made a beeline for me, calling me ‘a faggot’ before punching me in the face. It happened so quickly.

“I think I got knocked out. I don’t know whether I was lying there unconscious or my mind just went. I’m not sure. That is hazy.

“I do remember sitting on the side of the road, looking down at my left ankle, turned the wrong way. It just didn’t look like it was connected to my body.”

Evan has been advised that there is solid progress being made on identifying his assailant through the CCTV in the area.

“I haven’t seen it yet. It might be hard to watch, but some part of my brain wants to see it,” he admits.

“I haven’t been able to piece it all together in my head. But, I do want to know how he approached me, how he hit me, how I fell over on my ankle.”

There have been two surgeries already.

The crutches were ditched after seven weeks. The medical boot is lasting longer in order to stabilise the ankle and give it the best chance to heal, serving as an aid, but also a constant reminder of that night.

However, Evan has already been informed how early-onset arthritis is “almost guaranteed” to be a part of his future with a third operation to remove pins later this year.

At this point, the physical trauma has been overtaken by the emotional and the psychological fallout.

“For the first while, I think I was in shock. I would regularly get asked about it. It was almost like I was telling a story that wasn’t even mine. It was like I was talking about someone else.

“Gradually, it has made me paranoid. For instance, I was in town last week, during the day. I saw people fighting and I got this immediate ‘oh, shit’ moment. 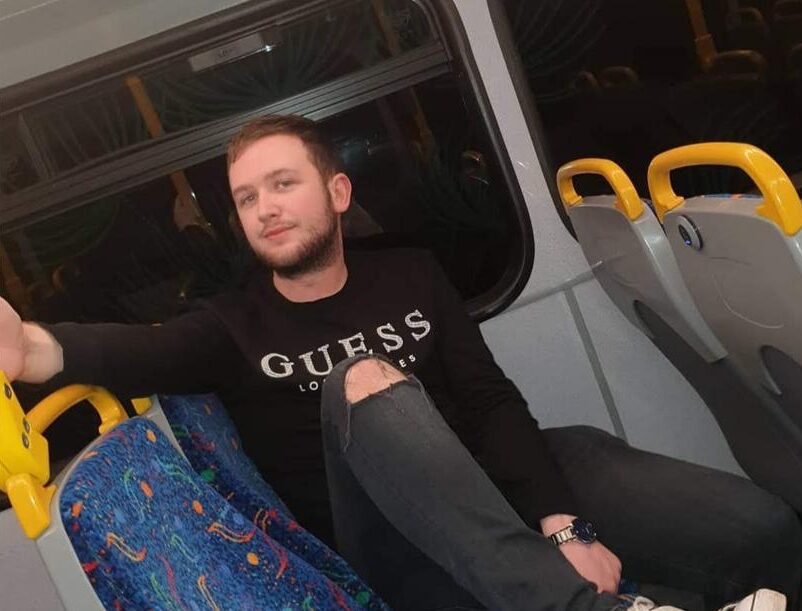 “Even though it was nothing to do with me, my heart started racing,” shares Evan.

“I am only starting to realise the impact it is having on me. I am more nervous, more scared, quicker to look over my shoulder and scan who is coming towards me on the street.

“I don’t want to feel like this. Even though I came out as gay when I was 16 years old, it has made me more cautious about sharing it with new people.”

He feels less able to reveal his true self in new company, giving up some of the valuable steps taken when coming out seven years ago.

“It is one thing doing interviews about it. It is a safe, secure situation. It is another to be walking through town, knowing what can happen.”

In 2015, Evan made a promise to himself to come out if the gay marriage referendum was passed. The emotional embrace from family and friends was universally warm and complete.

By 2020, he was looking to feel that warmth and welcome again only this time his social media intrigue drew him towards the game of rugby and a Dublin-based club, Emerald Warriors RFC.

For those not familiar with Emerald Warriors RFC, it was formed in August 2003 to provide an open, inclusive and safe environment for all to engage in rugby.

“I always wanted to try rugby. And Emerald Warriors just seemed like a good place to start playing. It was very welcoming and open to new members. It just seemed like I wouldn’t have to worry about who I am and whether I would be accepted,” he says.

“I have always been an anxious person. Joining the club was good for my confidence. It helped me come out of my shell.”

However, that dark night in April set Evan back, planting demons that come and go, removing a carefree attitude and installing a fear-first mentality that will take time to shake.

That is before we even mention the physical scars that will need time away from the rugby pitch to heal. 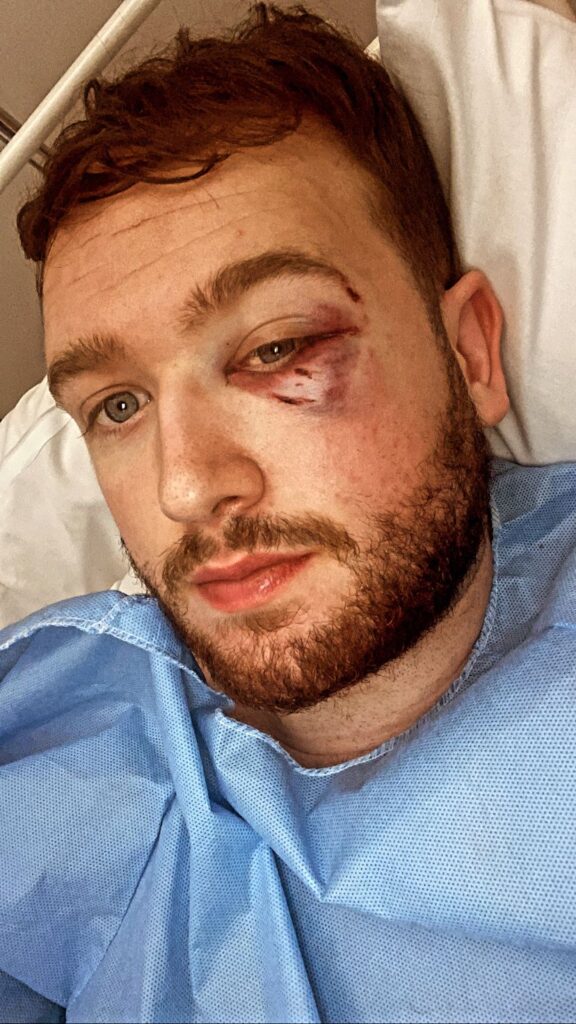 However, it is now and over the last few months since the attack, that the real shell of comfort from the Emerald Warriors has kicked in and there is a special place reserved in Evan’s heart for David Donnelly, in particular, as simply “someone I look up to in the club”.

He also cites Richie Fagan as a role model and Aaron Doyle for advice on communication with the media.

This has been necessary as Evan has chosen to speak openly about the threats still facing the LGBTQ+ community in our capital city.

“Couples are still afraid to hold hands walking down the street for fear of what might happen, even in 2022 Ireland. That is simply wrong.”

The speedy introduction of hate crime legislation in Ireland would act as an example of how seriously the government is taking this issue and work as a support for those on the receiving end of these abhorrent assaults.

“A lot of straight and gay rugby players have reached out to me, not just from my club. From others too. It does make a difference knowing how many people care.”

Evan does plan to go back to the Emerald Warriors and to pull on a jersey again when his body is able to cope.

“I think it will help to recover my physical confidence, just the action of tackling and being tackled.”

That is just part of the process of feeling whole again, emotionally, psychologically and physically.

“I have no idea what the future holds. I am hoping it will improve as time moves on.”

Evan just wants to leave the fear and the anxiety behind, to stroll the streets of his city in safety and to get back to the sport and the club that he loves.

Belong To and Leinster Rugby

For the month of June, Leinster Rugby are working with Belong To as our charity partner.

Belong To provide support and information for LGBTI+ young people through a number of support services:

Send Belong To an Email: info@belongto.org

If you need urgent support, you can contact any one of the support services below. Many of them are open 24 hours a day. You are not alone.

If you need support about any type of crisis, you can chat in confidence, 24/7 with a trained crisis volunteer over text. Connect with a trained volunteer who will listen to you and help you move towards feeling better. Here’s how the support service works:

The National LGBT Helpline provides a confidential, listening, support and information service to lesbian, gay, bisexual and transgender (LGBT) people. The service is also used by people who are questioning if they might be LGBT, as well as the family and friends of LGBT people and professionals looking for information. The service is volunteer-run and operates Monday to Friday from 7pm to 9pm.

Pieta House offers free specialised treatment to clients who self-harm, suffer from suicidal ideation or have made multiple suicide attempts. Clients receive an intensive programme of one-to-one counselling lasting about four to six weeks. They have branches across Ireland in Ballyfermot, Finglas, Lucan, Limerick, Tallaght, Kerry, Tipperary and Galway.

Samaritans provides confidential non-judgmental support, 24 hours a day for people experiencing feelings of distress or despair, including those which could lead to suicide.

Your Mental Health is a place to learn about mental health and how to support yourself and others. Find resources and support services near you

Transgender Equality Network Ireland (TENI) seeks to improve conditions and advance the rights and equality of trans people and their families. Their vision is an Ireland where trans people are understood, accepted and respected, and can participate fully in all aspects of Irish society.

Gay Switchboard Ireland provides a confidential telephone support service. Listening, support, and information are provided to all callers in a non- directive or judgmental way. The service is available to the LGBT community, their parents, families and friends, and to anyone who has concerns relating to sexuality, including HIV/AIDS related enquiries.