IADT Rugby Club gets off the ground… 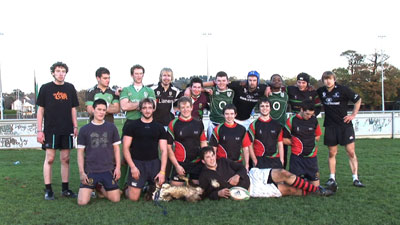 The Institute of Art, Design and Technology, Dun Laoghaire played their first ever competitive match recently when they took on Athlone Institute of Technology ‘B’ team at Seapoint in the Colleges Development League…

The club was founded in 2008 by Darragh Curtis and had played a number of friendlies and 10-a-side matches since then. They were contesting all through their first league match but ultimately went down to a well drilled Athlone IT ‘B’ team who double up as their College’s freshers team.

IADT got off to the worst possible start conceding a try inside the first five minutes but settled into the game and equalised through a try by second row Donal Martin before half time. IADT defended heroically throughout the 2nd half with back row forwards Tristan Dyer and Eamonn Hartford and backs Richard Mills and Vincent Lamb prominent. Eventually AIT’s greater fitness told and they ran out winners 20-5.

Club Captain Ronan Kelly is delighted with how things have progressed this season; “There is a great buzz around the College now that we have a rugby team. I would really like to thank everyone who has helped make this happen; Eoin Hogan (IRFU) and Stephen Gore (Leinster Rugby CRO) for all their help and support over the past year and of course to Seapoint for the use of their facilities.”

Next up for IADT is a trip across town to take on St. Patrick’s College in Drumcondra.