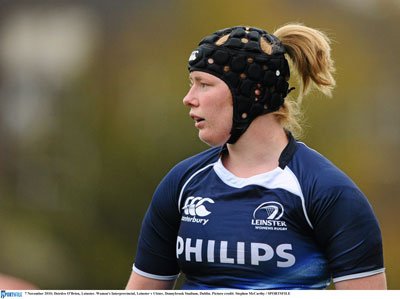 With just a week to go to the first of Irelands games against Italy it’s time to introduce you to one of the new girls, DEE O’BRIEN has a proven record on the domestic side of the women’s game having played for two of the top clubs in the country UL Bohemians and Blackrock. She has also played for both Munster and Leinster where she has proven to be a valuable player and is now rewarded with her call up onto the Irish set up. Don’t forget to come out and support her and the other Irish girls when they take on France in our first home game in Ashbourne RFC on Friday, 11th February at 7.30pm.

Why did you choose Rugby? To be honest, I lost a bet in college! I had to go out training and I loved it, so it’s the one bet I have never regretted losing.

At what age/level did you start? I started when I was 18 in first year in the University of Limerick.

Why did you decide to try out for the provincial team? I had been playing with my club team and I really enjoyed it, I knew the provincial side would be a great way to learn the more technical side of the sport and improve my rugby.

Was Leinster a team you always wanted or was any province up for grabs? I previously played with Munster when I lived in Limerick, but once I moved to Dublin I wanted to play for Leinster.

How did it feel to get picked for the Irish squad for the first time? It was very exciting but also daunting, as you know it’s a big step up and you have to push yourself harder in training and give total commitment.

How did you react to losses in the early years as opposed to now? Did they help you develop a certain mind set? Losing is always hard, but I think that nowadays I look at a loss and try to get the positive out of it. I try to identify the areas where we need to work and improve on.

Did you have any rugby role models that you followed when you were younger? I didn’t when I was younger, but when I started playing I always looked up to the senior players in the club and admired the commitment and passion they had for the sport.

What was your hardest competition to win that gave you the most satisfaction? The All-Ireland league final is always a tough competition. A year’s work comes down to one game; they are definitely the most memorable wins in my mind.

Do you have a certain training routine/programme that you follow to stay at top level? We would have a fitness, strength and conditioning and speed sessions programme we have to maintain throughout the season. Also with this you have your club and squad sessions. It’s a lot but you learn how to balance it.

What advice would you give to other women who wish to follow in your footsteps? Not to give up, you may be one the bench, the outskirts of making a squad, close to the starting team, don’t give up, sometimes it takes a while to succeed but it is worth it in the end.

Final Words? Give it a go!