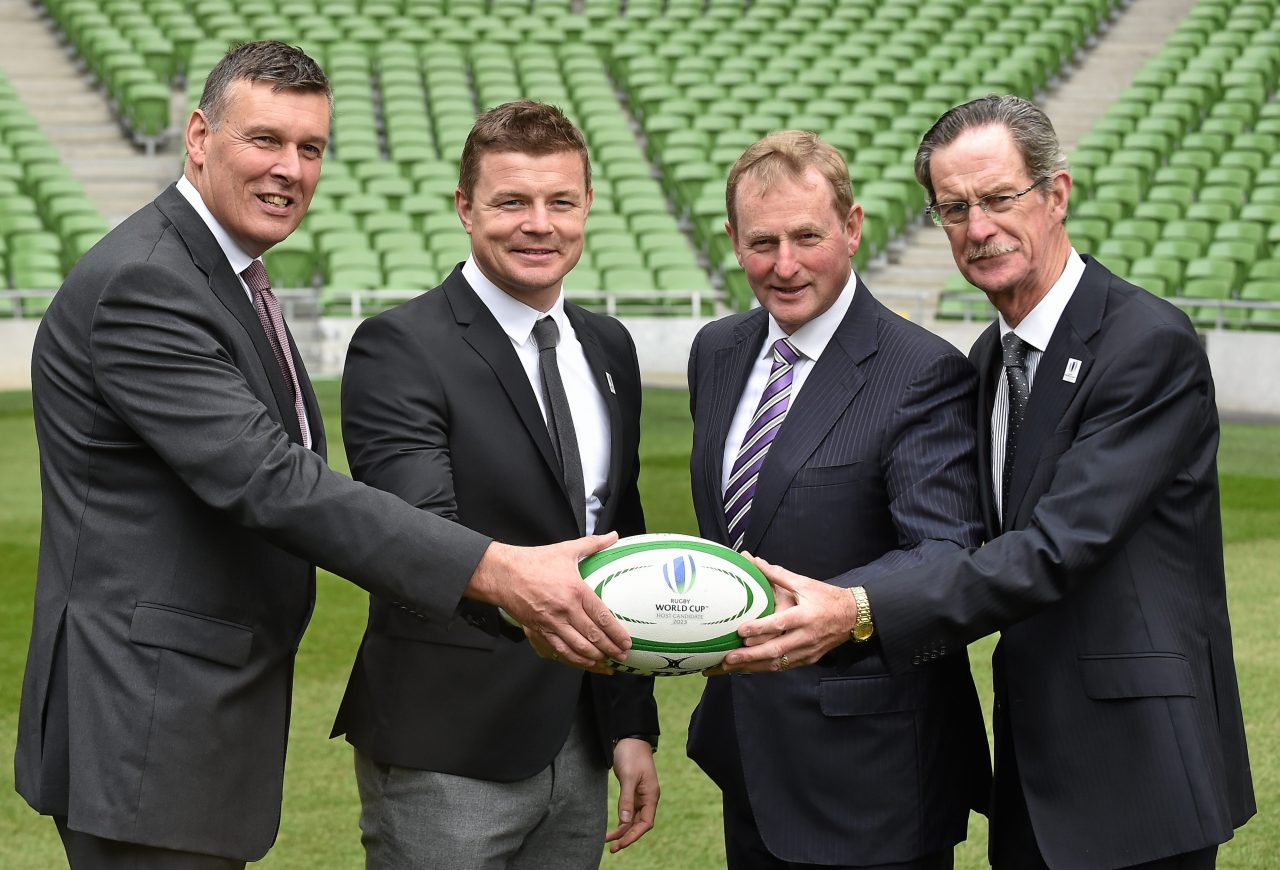 “This is a wonderful opportunity for Ireland to host one of the world’s biggest sporting events and we intend to ensure Ireland’s proposition will be world class and compelling.

“We believe Ireland is ready to stage a Rugby World Cup like no other.  A tournament that will capture the imagination of the world. A festival of rugby that will be full of Irish people’s unique spirit and an event that will help rugby to reach new audiences throughout the world.

“Our entire bid team has been inspired to even greater heights by the Irish team’s heroic victories in recent weeks over the All Blacks and Canada. We need this inspiration, for while the prize is indeed great, the competition is fierce and we will need to draw on every creative and determined fibre of our collective being if we are to succeed.”

“For many years our sporting ambassadors have travelled the world bringing colour, passion and friendship to sporting events everywhere. Now we want to bring the world to Ireland.

“We want the world to experience this colour, this passion, this friendship – here at home, with us. Ireland is waiting with open arms to welcome rugby fans from all over the world, to make Rugby World Cup 2023 the event of a lifetime, to deliver lifelong memories on and off the pitch.

“Ireland is ready for the World.”

“The 2023 Rugby World Cup bid is a bid for all the people of Ireland and the Executive will make every effort to make it a winning bid. We have a proven track record of hosting major global events including the G8, Giro d’Italia, MTV Music Awards, the World Police and Fire Games, the Clipper round the World Yacht Race and the Irish Open Golf Championship.

“This is a collective effort and I commend the GAA for placing its grounds at the disposal of the tournament, a key factor in Ireland’s ability to bid for the tournament.

“It is estimated some 445,000 are predicted to travel to Ireland for the tournament so it would be of immense benefit to the economy. Worldwide TV audiences for the 2015 Rugby World Cup in England reached some 4 billion people which offers global exposure money simply can’t buy.”

The bid has the backing of both Governments, through the provision of financial, infrastructural and services supports.

A 90 second video ‘Ready for the World’ (#Ireland2023) has been produced to encapsulate the spirit and theme of the Irish bid and it will be distributed internationally through a host of social media channels. Liam Neeson voluntarily gave of his time to narrate the piece.

The selection process will run from now until November 2017, when World Rugby will decide on the successful candidate to host the 2023 Rugby World Cup. During that period a detailed technical evaluation of the candidates will take place, with final proposals being submitted in June and a presentation to World Rugby scheduled for October.

An Tánaiste Frances FitzGerald TD focussed on the important role of the Diaspora saying:

“The 2023 Rugby World Cup has incredible potential to engage with our Irish abroad, the Irish diaspora, living and working all around the world.  Their support will be important and we are confident, given the success of the ‘Gathering’, that Ireland will see tangible support for a staging of the Rugby World Cup by way of many of the Diaspora arranging to travel to Ireland for the tournament.

“While here at home I know that communities the length and breadth of the country will embrace the tournament and provide a warm welcome to our visitors.”

“To bring the Rugby World Cup 2023 to our shores would be a great sporting achievement. Our bid not only has the support of both governments, the rugby and sporting fraternity are behind it and committed to seeing it through from this exciting and important stage to a successful hosting of the tournament in seven years’ time.

“We have experience in delivering major events and next year we will have the opportunity to host the Women’s Rugby World Cup with the play-off games and Finals set to be played at Queen’s University and the Kingspan Stadium in Belfast.  This will further demonstrate our ability to host major sports events as well as being a huge boost for sport.”

The Minister for Transport, Tourism and Sport Shane Ross TD reiterated the benefits to tourism commenting:

“Hosting the Rugby World Cup here would be a unique opportunity to showcase Ireland, not just to the hundreds of thousands of visitors who would come for the tournament, but to a worldwide television audience.  Ireland would also be in the international spotlight in the years running up to the tournament offering many opportunities to promote the country worldwide.

“I am also sure that visitors would get a fantastic reception while at the tournament that would not only lead to them making repeat visits but also recommending the country to family and friends.”