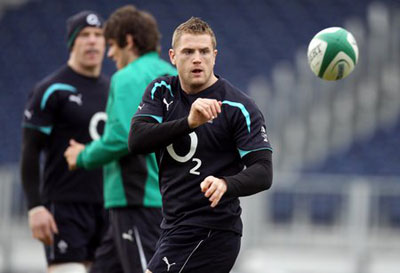 The Ireland team to play France on Sunday in the first RBS 6 Nations Championship game at Aviva Stadium (KO: 3pm) has been named…

Ireland Coach Declan Kidney has made one change to the team that started against Italy last Saturday with Jamie Heaslip named at Number 8.

Sean O’Brien moves to blindside and Denis Leamy is named in the replacements in place of Shane Jennings. David Wallace completes the back row.

Ireland Captain Brian O’Driscoll is in touching distance of yet another milestone – the Championship try scoring record that has stood since 1933. O’Driscoll is one try short of equalling Ian Smith’s record.