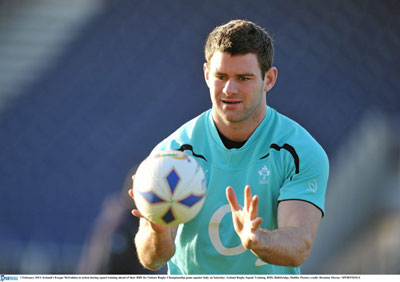 The Ireland team to face Italy in Saturday’s RBS 6 Nations opener in the Stadio Flaimino, Rome (KO: 3.30pm) has been named and Leinster’s Fergus McFadden will make his debut in a side which contains one new cap and nine changes from the game against Argentina last November…

McFadden, who started his rugby in Cill Dara RFC, is selected on the right wing and will play in a new combination back three with Keith Earls picked on the left wing and Luke Fitzgerald being chosen at full back for Ireland for the first time.

The final change to the backline sees Tomas O’Leary come into the scrumhalf position after missing all of the Guinness Series in November due to injury.

In the pack, Rory Best returns to the side at hooker with Mike Ross earning his first start in the championship at tight head prop. Paul O’Connell is another who returns to the team to earn his 71st cap in the second row.

The back row is also a new combination at international level with Denis Leamy selected alongside David Wallace and Sean O’Brien, who earns his first RBS 6 Nations start for Ireland.