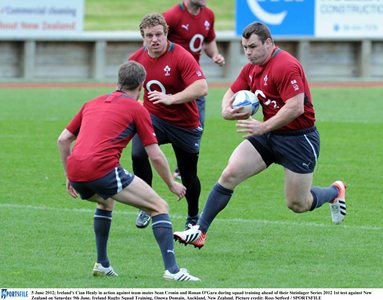 The Ireland team to play New Zealand in the first test of the summer tour on Saturday in Eden Park, Auckland (KO: 7.35pm local time, 8.35am Irish time) has been named and includes seven Leinster players in the starting XV and a further three named on the bench…

Wing Simon Zebo and prop Declan Fitzpatrick also make their first starts in the green jersey at this level.

Zebo, who is the youngest member of the touring squad at 22, starts on the left wing in a team that has an average age of just over 26 and includes a new centre partnership between Keith Earls and returning captain Brian O’Driscoll, who missed all of the Six Nations Championship due to injury.

Fergus McFadden, who hails from The Curragh, starts on the right wing in a back three that includes Zebo and Rob Kearney at full back. Jonathan Sexton starts at No.10 and is partnered by Munster’s Conor Murray.

In the forwards, Declan Fitzpatrick starts at tight head prop after Mike Ross failed to recover sufficiently from the hamstring strain that has been bothering him over the last two weeks.  Fitzpatrick will start alongside loose head Cian Healy and hooker Rory Best, who will be winning his 60th cap.

Dan Tuohy make his first start for Ireland in the second row after making his debut against the All Blacks as a replacement in 2010 and will partner Donnacha Ryan. Behind them, Peter O’Mahony, Sean O’Brien and Jamie Heaslip are all named to start in the back row.