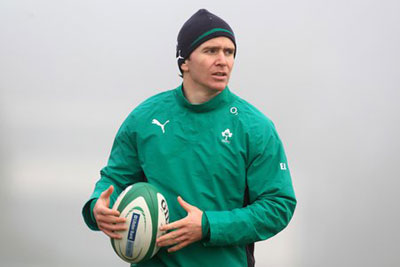 The Ireland team to face Scotland in Sunday’s RBS 6 Nations clash against Scotland in Murrayfield (KO: 3pm) has been named…

There are three changes to the side from the team’s last outing and all of those changes are in the backline. Tommy Bowe has recovered from his knee injury that ruled him out of the first two games of the championship and is named on the right wing in place of Fergus McFadden.

There is a change at out half with Ronan O’Gara coming into the team to win his 106th cap for Ireland and Jonathan Sexton moving to the replacements.

Tomas O’Leary has been ruled out due to a back injury, so Eoin Reddan comes into the team to start and Peter Stringer is named on the bench.

Donncha O’Callaghan is named in the second row where he will win his 70th cap for Ireland while Brian O’Driscoll will captain the team for the 73rd time.

Meanwhile, Leinster’s Nathan Hines has been named on the bench for Scotland as coach Andy Robinson has made seven changes to his starting XV for Sunday’s vital RBS 6 Nations clash at Murrayfield.