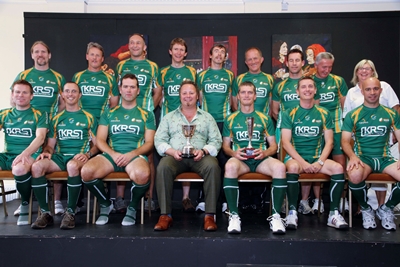 The Ireland Touch players are officially on their campaign to take European titles. The four Irish Touch teams were recently presented with their official playing strip by their main sponsor Sven Knight, of Knight Rigging Services…

The four teams representing Ireland are the best male and female Touch players in Ireland. They will compete in the Mixed Open, Men’s Open, Men’s 40s and Senior Mixed divisions at the European Touch Championships 2012 (ETC2012). The Championships are been hosted by Touch Italia, under the direction of the European Federation of Touch (EFT) in Lancenigo Di Villorba, near Treviso Italy, from the 12th to the 16th September.

“The pride in wearing an Irish jersey is something special for any sports person lucky enough to be selected to represent their country,” said the President of the Irish Touch Association (ITA) Garry Glenn. “These players understand the commitment that is required to compete at this level and we hope to see the results in Treviso next month. We are hoping that through our participation at the 2012 European Touch Championships, and our hosting of the Home Nations next year in Dublin we can highlight Touch as an accessible sport for Irish men and women of any age.”

Gráinne Leach, Manager of the Irish Mens Over 40 Team, added: “A lot of hard work has gone into ensuring our teams are ready to take on the best in Europe. The Irish Men’s Over 40’s and the Mixed Open team will both be defending their title of European Champions which they secured in 2010.”

The game of touch was established in Australia more than 40 years ago. The game has been competitively played in Ireland for the last five years and the numbers playing are increasing all the time. Touch is a unique sport where men and women can play side-by-side at an International level. Touch is also played in Ireland by many people as a social mixed sport in many rugby clubs in Ireland.

Competitions such as the European Championships are the perfect setting to showcase the natural talent of many Irish touch players. The Ireland Touch Association (ITA) is the body responsible in Ireland for the promotion and development of the game, and for entering Irish Teams in international competitions.

For more information on Touch Rugby in Ireland, please visit: www.irelandtouchassociation.com or join us on facebook.