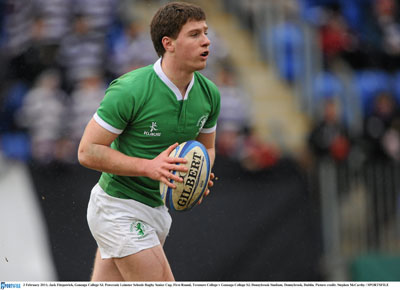 The match is a qualifying game for the FIRA/AER U-18 European Championship, which takes place in the Armagnac-Bigorre region of France between 15 and 24 April 2011.

The Ireland Under-18 Schools were defeated by England Schools in the first qualifying fixture back in December, so this game is important in deciding which section of the FIRA-AER tournament they qualify for. Scotland beat England 26-21 in Leeds last weekend, so the Ireland side now need a bonus point win and to deny Scotland a bonus point to ensure qualification for the elite section.

Coach Terry McMaster knows that his team will have to put in a top performance to overcome a Scotland team that will be brimming with confidence after their win over England: “Scotland showed they are a team with plenty of talent by overcoming England on home soil, so it puts it into perspective as our lads need to deliver a performance against the Scots that is of the highest order. To put one over a strong England team in those circumstances demands respect.”

“In saying that, I think there is plenty of talent in our own side and while this is a new team coming up against a Scotland side that already has a game under their belt, our team has plenty of knowledge of each other in specific units, through playing together as part of their own schools teams, to knit quickly enough. The key is to deliver accuracy on their individual areas and the collective will look after itself.”