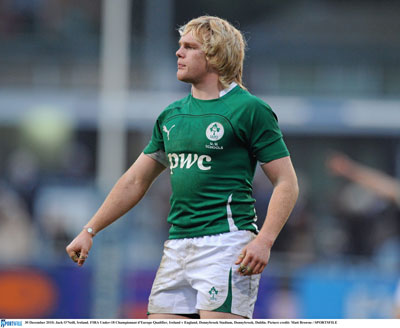 The Ireland U-18 Schools squad, sponsored by PwC, to take part in the U-18 FIRA/AER Championship (Justin Bridou, Armagnac/Bigorre, 15 – 24 April) has been named…

Head Coach Terry McMaster has selected a 26 strong squad for the tournament, to be played in the Armagnac-Bigorre region of France between 15 and 24 April 2011. For the first time, all of the Six Nations countries are taking part, joining 22 other teams from across Europe in their annual Championship.

Ireland qualified for the elite pool of the tournament which also includes England, Wales and France. The team booked their place with a well merited 31 – 12 win over Scotland U18s in Glasgow earlier this month.

The U-18 School Squad will start the tournament with a Semi Final game against host team France in Auch on Sunday April 17th.

The winners progress to a final with the losing team in a third place playoff against the other losing semi finalist.