Ireland Under-20 team to face France… 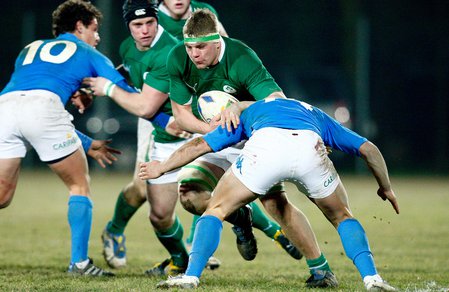 The Ireland Under-20 team (sponsored by PwC) to play France in Dubarry Park on Friday night (KO: 7.45pm, LIVE RTE2) has been named by Coach Mike Ruddock…

Ruddock has made eight changes to the squad which beat Italy in the opening game of the 6 Nations Championship.

The changes include five new faces in the starting XV and three new players in the replacements.

Michael Sherlock comes in at full back with Tiernan O’Halloran, a member of last year’s squad named on the wing. Nathaniel McDonald comes in at centre to partner Alex Kelly.

A new look back row sees David Heffernan start at blindside with Aaron Conneely coming off the bench to openside and Jordi Murphy moving to number 8. David O’Mahony makes a start in the second row alongside local boy Daniel Qualter.

Shane Buckley, James McKinney and JJ Hanrahan are included on the bench.