Ireland Under-20 team to face Italy… 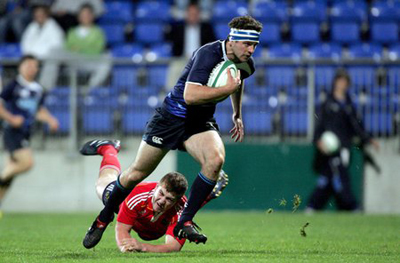 The Ireland Under-20 team (Sponsored by PricewaterhouseCoopers) has been named for this Friday’s opening game in the Under-20 Six Nations Championship against Italy in Parma (KO: 6pm)…

The Under-20 team will be defending their 2010 Six Nations Championship title and five players from last year’s squad have been named in the team to face Italy.

Winger Andrew Conway makes a return to the side from last season along with Jordi Murphy and Niall Annett who will captain the side. David Doyle and Brendan Macken have been named in the replacements.

Speaking ahead of the opening game, Coach Mike Ruddock said: “After winning the Championship last seasons the stakes are set high for us this year. But this is a new season, a new squad and a clean slate.

“Our focus for now is on kicking off the championship with a strong performance and while it is great to have a core of experienced players we will be looking for the entire squad to show what they can do.

“We have prepared well and have gelled as a team. The skill level, attitude and performances of the players and of the team as a whole have been very impressive. We hope to reproduce this for the tournament.”

The Ireland Under-20 team has been supported by sponsors PricewaterhouseCoopers over the last five seasons, during which time the team secured a Grand Slam in 2007 and won the Championship last year.

Commenting on their support of the under-20 team, Ronan Murphy, Senior Partner, PwC said: “We are delighted to support Irish Rugby and the Under-20 team in particular. Success on the pitch is determined by having the right team with the right talent playing to win. Likewise, at PwC, by having the best people working together we are committed to helping our clients tackle today’s tough business challenges. We wish the Under-20 team success in their forthcoming RBS 6 Nations Championship.”