Ireland Under-20 team to face Scotland… 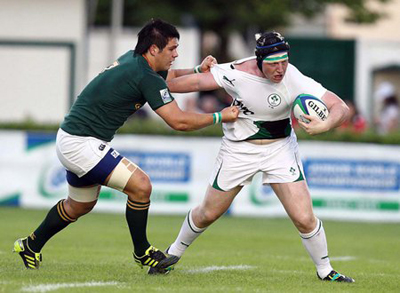 The Ireland U-20 team (sponsored by PwC) for the final pool game of the Junior World Championship against Scotland at the Stadio Mario Battaglini, Rovigo on Saturday (KO: 7.10pm Irish time) has been named…

Coach Mike Ruddock has made five changes to the starting XV for this game which will decide where in the playoffs Ireland will compete.

Up front Iain Henderson returns at lock alongside Michael Kearney while in the back row Dominic Gallagher comes in at blindside with Jordi Murphy moving to No. 8.

There are three changes in the back line which sees the return of Paddy Jackson and Luke Marshall at fly half and first centre while Andrew Boyle will start on the left wing.

Speaking from the team base Mike Ruddock said: ‘Following two very physical battles we have turned our attention to a Scotland team that is much improved from the 6 Nations.

‘They played very well against England and play a very expansive off loading game. We will have to be at our best to beat them and that is our goal. I have made 5 changes to the starting line up with experienced players like Luke Marshall, Paddy Jackson and Andrew Boyle coming back into the team.’