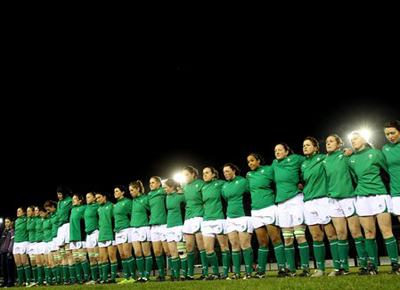 Ireland were 22-12 winners when these sides meet in Pool B last Tuesday week, but the Americans’ power and athleticism helped them dominate this 5th-8th place play-off at Surrey Sports Park.

Ireland ended the first half 21-3 down and with lock Marie Louise Reilly in the sin-bin, as touchdowns from Victorian Folayan and Amy Daniels sandwiched a penalty try.

A second seven-pointer from Daniels, on the hour mark, ended the game as a contest, and with influential centre Lynne Cantwell in the sin-bin, Ireland leaked two late tries.

Joanne O’Sullivan, who slotted in at out-half for the first time in the tournament, got the Irish back-line moving early on and the Americans needed some aggressive first-up defence to keep Ireland at bay.

Cantwell and Joy Neville looked threatening with ball in hand, but the USA’s impressive scrum gave them a platform from which they built their match-winning lead.

Ireland fell behind in the eleventh minute when flanker Beckett Royce broke the defensive line and winger Folayan showed great pace to finish off close to the posts, allowing out-half Christy Ringgenberg an easier conversion.

Shannon Houston, Niamh Briggs and Louise Beamish countered well as the girls in green hunted for an immediate response, however the forward battle was going the Americans’ way.

They had the psychological advantage too when referee Sebastien Minery awarded them a penalty try after a series of reset scrums. Ringgenberg tapped over the conversion for a 14-3 lead.

The Americans launched a couple of kick chases which saw the ever alert Briggs scramble well, and a solid lineout gave Ireland some welcome possession as Kathy Flores’ side continued to look dangerous.

Another well-worked lineout saw the Irish forwards drive it up and earn a penalty, on the half hour, which Briggs knocked over for her side’s only points.

Just when it looked like Ireland would draw closer, they lost Reilly to the sin-bin. And only a minute later, the Americans used scrum ball to send centre Daniels scampering through for their third converted try.

21-3 down at half-time, Ireland regrouped and enjoyed one of their best spells at the start of the second period. The lineout looked strong and Neville and team captain Fiona Coghlan orchestrated a couple of penetrating drives.

The USA had flanker Kristin Zdanczewicz yellow carded as the girls in green began to press, and winger Nathalie Marchino needed a textbook tackle to bring down Briggs on a superb attacking run.

Any hopes of an Irish comeback were buried though by the Americans’ fourth try. With 56 minutes on the clock, winger Folayan broke free and offloaded for Daniels to complete her brace, with Ringgenberg again adding the extras.

Philip Doyle’s charges did not let their heads drop and continued to play some good quality rugby, but Cantwell’s sin-binning invited the USA back on the attack and they notched two tries in the space of four minutes, through Folayan and replacement Vanesha McGee.

A last-minute penalty miss from Briggs just summed up a day Irish captain Coghlan and her team-mates will want to quickly forget.

Although a huge setback, Ireland at least have a chance to bounce back from today’s loss when they take on Six Nations rivals Scotland in Sunday’s 7th-8th place play-off at Surrey Sports Park (kick-off 11.15am).