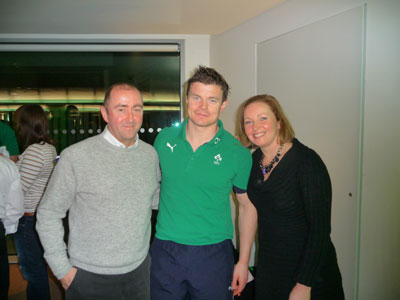 More prizes can be won with a memorable day out to see Ireland play England at the Aviva Stadium.

Cecily Donnelly and her husband Donal from the ‘Cookie Monsters’ team playing IRFU Tag were the first competition draw winners of 2011 after their captain Paul Quinn listed all his players while registering the team to play.

On Sunday, before the Ireland v France game kicked off, Cecily and Donal went pitch-side at the Aviva Stadium for a photo while the match-day squads warmed up nearby.

Follwing an extremely high tempo game in an electric atmosphere, which saw Ireland being pipped by three points, the lucky winners went to the official post-match reception where they met Brian O’Driscoll, Jamie Heaslip and many more.

Anyone wishing to enter their teammates for the IRFU Tag competition draw should do so before the deadline for the next draw of the year up on Friday, March 11th.

All player names entered on the online registration form will qualify to be drawn for an exclusive VIP day out at the Ireland v England game on March 19th.

For details on how to enter or register your team, see a list of venues or see more photos of who Cecily and Donal met at the Aviva Stadium, go to the IRFU’s tag website, www.irfutag.ie