Jennings and Fogarty back ‘Bake for Brain injury’ campaign… 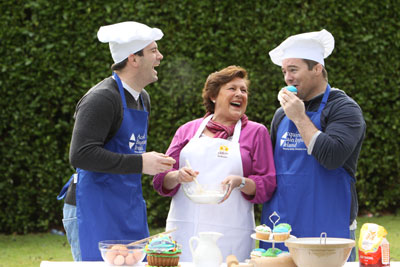 The ‘Bake for Brain Injury’ will take place during Brain Awareness Week from Monday 7th March to Sunday 13th March; encouraging people to bake and donate online at www.abiireland.ie

It has been estimated that over 10,000 people are affected by an ABI each year in Ireland. Men are three times more likely than women to acquire a brain injury, and young men in particular between the ages of 16 – 24 are at high risk.

Speaking about the launch Barbara O’Connell, Chief Executive of Acquired Brain Injury Ireland said, “We are calling on all those who can, to get involved in Bake for Brain Injury by hosting a bake sale in aid of ABI Ireland at home, school, work or in your local community.

“The past two years have been difficult for us all. Funding for voluntary disability organisations has been significantly affected by the economic downturn, leading to a significant freeze to the development of existing services, and no future development for much needed extra services. It is because of this that fundraising, now more than ever, has become a crucial factor to the survival and development for us as an organisation; caring for those with an Acquired Brain Injury”.

ABI Ireland provides vital support services to enable people with ABI maximise their abilities. We also work to reduce the number of people affected, by raising awareness of the causes of ABI. Our annual ‘Mind Your Head’ campaign has successfully raised awareness of the importance of wearing protective helmets when cycling or playing contact sport. For 2011, the Mind Your Head campaign is placing its focus on Concussion, and the importance of both protecting and educating our young players”, she said.

For many athletes collisions are often part of the game, however repeat concussions are very serious. After a blow to the head, the brain remains in a vulnerable state for several weeks, increasing the risk of a repeat concussion.

Speaking at the launch John Fogarty said, “Whenever I got a knock to the head on the pitch I would shrug it off and tell people “ah sure it was only a knock”, I didn’t want to let down my team mates and I didn’t want to be sidelined for an enforced period of rest. I never gave my body the chance to heal after these knocks and my family and I are now living with the consequences. To me concussion was a natural side effect of the game. I now understand the complexities associated with it and the need for the care of concussion to be highlighted.”

The Mind Your Head campaign is reaching out to all sporting bodies to educate all their players and coaches alike about the importance of concussion management for their specified sport.

Shane Jennings added: “It’s great to see more people becoming aware of the issue of concussion. The game is constantly becoming more physical and so as players we must do what we can to prevent any long-term damage. In the end it’s your health that matters”.

Odlums Catherine Leyden brought the focus back to baking as she encouraged the rugby stars to roll up their sleeves and get baking, “It’s great to have the opportunity to teach these lads a few skills they may need ‘off the field’, I think we may even have a few bakers in our midst”, she said.

ABI Ireland’s Bake for Brain Injury hopes to raise urgent funds for the improvement and development of Community Rehabilitation services throughout Ireland. Making a difference in the lives of those with an Acquired Brain Injury; ensuring a life of maximum ability, not life-long disability.