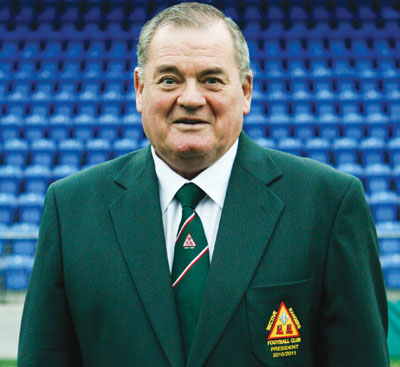 The Members of Bective Rangers F.C. deeply regret the untimely death, in Cardiff, of Club President Joe Nolan, in the immediate aftermath of the Wales v Ireland game at the Millennium Stadium…

Joe was elected as President of Bective Rangers in May 2010 and was delighted and honoured to be asked to take on what he considered the highlight of his many years as a Member of the Club. He was a welcoming President for visitors to Bective and a great ambassador for the Club when representing it at matches and official functions throughout this rugby season. He hosted the Bective Annual Dinner the previous weekend on Friday 4th March which was a most enjoyable occasion for everyone who attended.

Apart from his being the most successful Captain and Manager during his years in Bective – from Minis through to Vet’s and many teams in between – Joe had, prior to joining the Club, also been a Member of Greystones R.F.C. where he was Captain in 1968. He was one of many who came to Bective through that route and ensured that the association between the two Clubs remained one of great friendship and camaraderie.

In the week preceding his sudden death Joe had been very involved in the organising of the annual match for the Kieran Murphy Memorial Trophy. Kieran had, likewise, served enthusiastically, and loyally, with both Clubs and the Trophy was initiated to commemorate his memory and to continue fostering the exceptionally good relations which exist between the Clubs.

As Joe was actively promoting the game and, as he was one who always felt that “the show must go on”, the match went ahead. There was a good attendance at the match from both competing Clubs, Joe’s work colleagues, members from other clubs and friends and relations. The Bective Junior players were training on the back pitch and joined everyone else for a minute’s silence before the start of the game.

The game was most entertaining and action packed, with an under-strength Greystones losing to a motivated Bective 36-14. Kieran Murphy’s wife Elva commented that the night was a great memorial to both Joe and Kieran and they would never be forgotten by either Club; she was delighted to be able to present the Trophy to Alex Kelleher Captain of Bective.