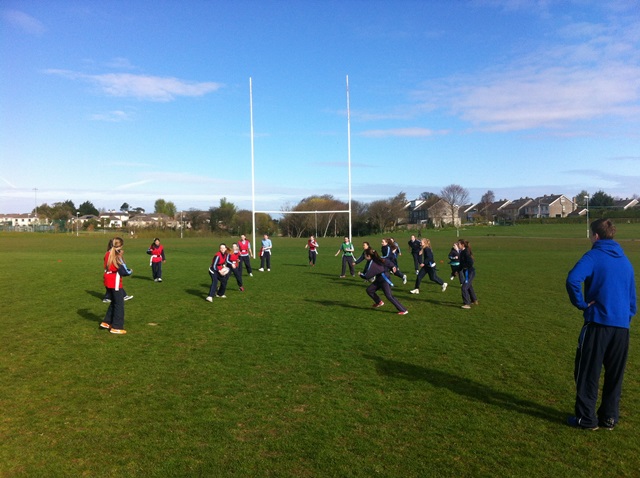 After taking part in the six week programme the girls competed against each other with fantastic intensity, fun and enjoyment…

On a sunny Thursday morning Johnstown girls school put on a rugby show at the Seapoint Rugby club grounds in Kilboggat park.

After taking part in the six week programme the girls competed against each other with fantastic intensity, fun and enjoyment which was evident to the numerous passers-by that stopped to watch what was unfolding on the pitch.
The programme taught the girls the basic skills and fundamentals of rugby through fun based games and drills.
The girls took all of this in their stride and there are some future stars of the game in this group.

A passer-by said “it’s a joy to watch the game being played with so much fun and the skill level is fantastic for just six weeks”.

Leinster CCRO Stephen Costelloe said “The girls were fantastic to work with, they embraced the game and ran with it, we had a mascot and a special interpretation of the haka and were treated to some fantastic rugby”
Leinster Rugby would like to thank the girls for taking part along with the school and teachers. Also a big thank you to those who came down to help and will look forward to seeing how these girls progress in the very near future.