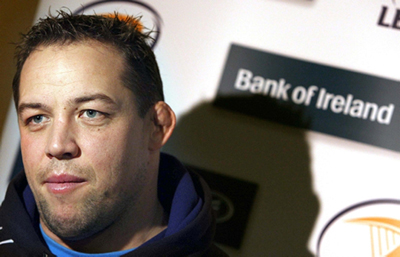 Speaking ahead of Friday night’s Magners League clash, Leinster Forwards Coach JONO GIBBES said that the squad are looking forward to a tough contest against the Glasgow Warriors…

‘Where I come from it doesn’t snow, so today (Wednesday) was my first day actually being out on a rugby field and for it to snow! It was a bit of a novelty for around 20 seconds, and then it was just miserable. To be fair our training facilities here are really good and the field we use hasn’t frozen so disruption has been minimal.

‘The players trained really well today and everyone’s got their fingers crossed that the RDS ground-staff are able to work a miracle and the weather co-operates to enable this game to go ahead.

‘It’s pretty important that the match goes ahead (in the context of last weekend’s postponement), but also because we’re back in the RDS and we get to face the top of the table team. They’re really confident and have been consistently performing this year, so we get to measure ourselves and take them on and try to challenge them.

‘It would be less than ideal to go into those (Heineken Cup) games without two weekends of rugby, but in saying that these are the cards that you’re dealt and it wouldn’t be the worst thing either because the few players who had bumps and bruises might benefit from the break.

‘I thought that the direction that Shaunie (Berne) gave us in Jonathan Sexton’s absence was fantastic and I’m sure that Jono can settle into the driving seat, just as Shaunie did, if selected. From a forwards point of view, as long as they look after us and play it in front of us, we’ll be happy!

‘Now that the club have announced who the coach is for next season it means that there’s a degree of stability and there’s no kind of smoky mirrors and everything moves on. I played against some of the teams that Joe (Schmidt) coached and he’s highly regarded in New Zealand. Of all the backs coaches going around, it’s his name that keeps popping up as someone who’s a real ‘out of the box’ thinker.

‘His ideas are probably different to some of the established coaches in New Zealand rugby. He’s cutting edge and everyone who I’ve spoken to has a lot of good things to say about him. As regards my situation, we’re sorting some stuff out and seeing what my options are. I have really enjoyed my time here. It seems like the time has gone really quick and I really enjoy the players I work with.

‘I really enjoy that the forwards, who I work on a daily basis with, are highly motivated, pretty intelligent and deep thinking rugby guys. And they’re proud of being Leinstermen. I’ve learned a lot from them and it’s quite stimulating to come to work and enjoy the people that you work with.

‘Shane (Jennings) has been fantastic really. Obviously he did a bit of pre-season work and up-skilling in different organisations in Australia. He has been working on game-day; running the water and giving messages and his training involvement has been good. He has been organising and helping Kurt (McQuilkin) and is such a good organiser of our on-field defence which is a big help.

‘I think that he’s a selfless guy and a real team man. He never pushes his own agendas and we’re looking forward to having him back on the field. Twelve weeks is a long time not to play and it would be really good for him to get a run.’