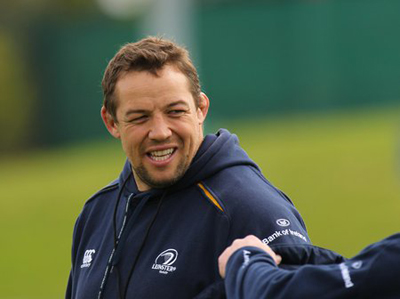 Speaking ahead of Friday night’s Magners League clash against the Scarlets, Leinster Forwards Coach JONO GIBBES said that the squad are determined to get back to winning ways…

ON AREAS OF IMPROVEMENT: “We have looked back on the Ospreys game and the two areas that we were particularly disappointed with were our scrum and our attacking lineout. We were disappointed that we weren’t clinical enough in those areas and, with regard to the scrum, we didn’t adjust to their tactics as quickly as we have in other games. Given the way that the Scarlets are playing right now, we have to be more clinical. No question about it.”

ON SCARLETS: “We played them four times last year and you could see that they were a side in transition at that time. Their victories over London Irish in the Heineken Cup (last year) were an indication that they had real talent and you could see what they were trying to do. They’re building momentum in the Magners League and they have really clicked of late. They look a well-drilled outfit and their playing style has been impressive this season.”

ON FAMILIAR FACES: “Simon Easterby has improved their defence this year and has given the Scarlets a real backbone. I played for a few years back in New Zealand with Regan (King) and I’m acutely aware of the threats that he poses. Regan will ask questions of us defensively. I also played with Deacon Manu and against David Lyons so they have some really strong overseas players in their contingent alongside a good crop of Welsh players.”

ON RE-INTRODUCTIONS: “All we’re doing this week is looking at what’s in front of us. It’s important we front up early. A player like Nathan (Hines) coming back, after having a really good November series with Scotland, will be a bonus because he bolsters us. Dev (Toner) has experienced Test match footy for the first time, while Seanie (O’Brien) will be itching to get a game after probably not playing as much as we would have expected with Ireland. Guys like that will bring a good edge and all of the international players will be appreciative of the points the boys picked up while they were away.”

ON FRONTING UP: “We’re not in a position to start looking too far ahead of ourselves. This week is about what we bring mentally and physically to the Scarlets. All we can do is concentrate on this challenge because we’re mid-table and it’s very congested there at present. Obviously we’re aware of what’s around the corner (ASM Clermont Auvergne), but we’re of the view that we missed out on a couple of points on Sunday night and we need to be clinical in what is a shorter week for us than normal.”