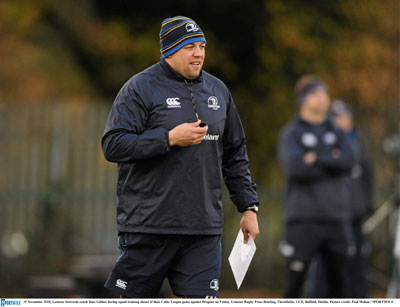 Speaking ahead of Monday’s interprovincial derby, Leinster Forwards Coach JONO GIBBES said that the squad will approach the challenge of Ulster in a positive frame of mind…

“There were a few internal realities within the group after the Clermont game and while we had a positive result, the players understood in the analysis of the game that a few things were not up to scratch.

“Our defensive lineout work and the try we conceded were pretty poor and although the good work that was done in the 60 minute period allowed us to have a bit of a buffer, we should have been more ruthless.

“We’re facing into the challenge of three tough Magners League games coming up and it’s a pretty fractured playing roster (at this time of year) with guys coming in and out of the squad. Irrespective of who plays, we need to be harder on ourselves.

“There will be opportunities for some of the younger players to impress and the coaching team have been pleased with a few of the positive examples of younger guys taking opportunities.

“The nature of being involved in two competitions, coupled with the demands of the November and Six Nations windows mean that injuries are going to happen and depth in a squad is important. There are still a few guys who probably haven’t been given as many minutes as we’d have liked at this stage but this period, as well as the games being played over the Six Nations, will provide more opportunities.

“Christmas is a challenging time, especially for players with young families, but I think everyone understands that there are sacrifices to be made and there has been a good atmosphere around the camp this week. There have certainly been a few challenges, but you won’t hear too many complaints from inside the camp.

“I think that the players have handled the weather disruptions really well and with the lack of training pitches and indoor facilities we have just gotten on with our preparations and have soldiered along.

“I think Ulster will pose a massive mental and physical challenge for us and they have been going pretty well recently in the league and especially in their two wins over Bath in the Heineken Cup. They have a good hardened core and it will be really important for whoever steps in that they’re up to speed pretty quickly.

“Both times we’ve played up there during my time here have been massively confrontational games. The weather dictated that neither team could have a good crack at each other last year, but the game the previous year was played on a crisp clear night and it was a pretty fiery encounter.

“The lessons that you learn from being involved in interprovincial derbies is that these are the games that no-one wants to lose.”