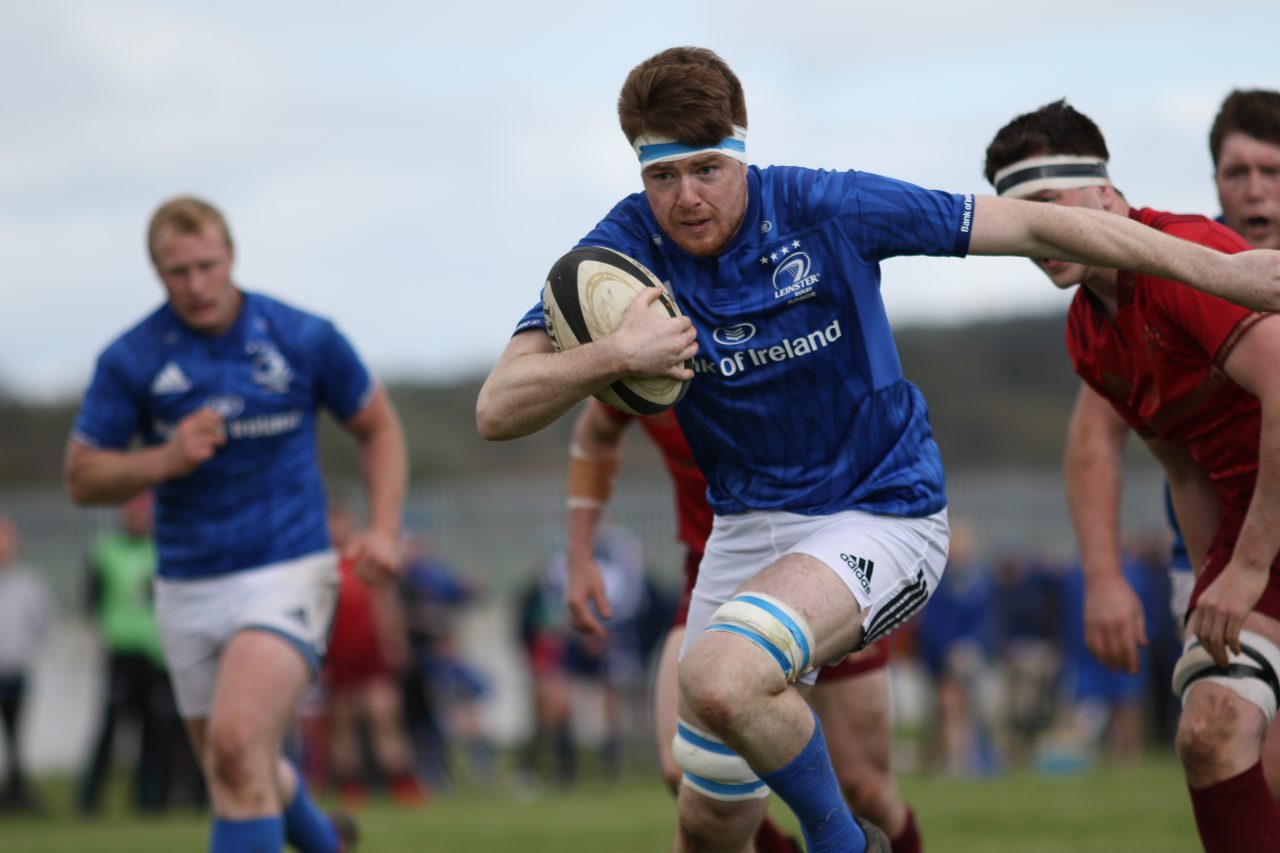 The Leinster Juniors got their defence of their Junior Interprovincial title underway with an impressive away win against Munster over the weekend. The match, played at Skibbereen RFC, was a very tough encounter and for long periods, especially in the first half, Leinster looked to be in some bother against a strong and very determined Munster outfit.

Leinster played with the benefit of the very strong wind at their backs in the first half. They missed a kickable early penalty and then went behind on 11 minutes to a well worked Munster try scored by their No. 8, Jamie Kind. Leinster rushed the conversion which was successfully blocked and the Munster lead was pinned at 5 – 0. That’s how the score remained until half time though this does not mean that the half was uneventful. Far from it in fact. 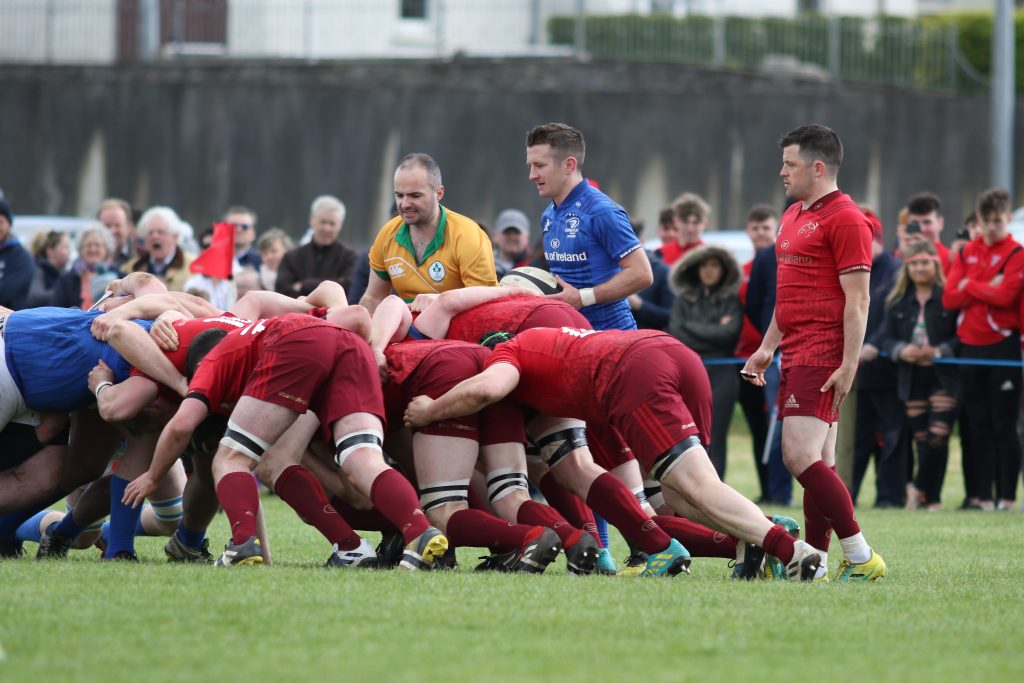 A major talking point in the match was the dominance of the Leinster scrum which did not always get what the visitors believed to be the just rewards. Indeed, having been warned on a couple of occasions with scrum penalties awarded against them, Leinster loose-head prop Cathal Bannon (Monkstown) was yellow carded on 27 minutes. He was deemed to have driven upwards in a scrum when his opposite number appeared to bore inwards when under pressure. Down to 14 men, Leinster dug deep and kept their hosts at bay. Soon after Bannon’s yellow card another scrum led to the redoubtable Johnny Gray (Dundalk) coming on with No. 8 Stephen Smith (Tullow) temporarily making way. The seven man Leinster scrum drove forward in that scrum with determination earning a penalty and relieving pressure. The half ended with no further score and Munster turning around with the wind at their backs and a 5 – 0 lead.

Early in the second half Munster missed a kick at goal but were rewarded in the 6th minute with a penalty from a high tackle. The kick at goal was slotted and Munster were further ahead, 8 – 0. Johnny Gray had just left the field with a suspected hamstring injury allowing Bannon to return to the fray. A few minutes later, Munster replacement Jack Breen was yellow carded and suddenly the tide seemed to turn Leinster’s way. 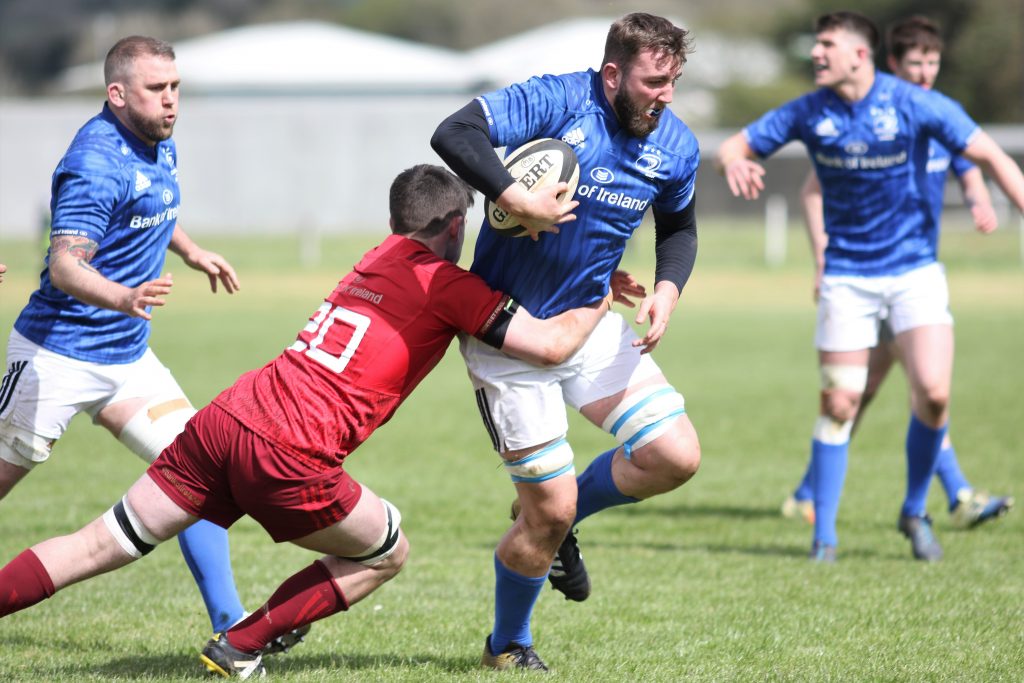 An exciting free flowing movement by the Leinster backline resulted in a try for winger Hugh Gowing (Monkstown) which was converted by out-half Jake McDonald (Kilkenny). 8 – 7 to Munster. Leinster were on a roll now and just 8 minutes later, Leinster were to take the lead for the first time. A penalty was awarded to the hard working Leinster pack just inside the Munster 22. Rather than kick at goal, Leinster went to the corner. Some slick interplay involving forwards and backs saw replacement lock Conor Hurley (Ashbourne) burst over for a critical try which was also converted by McDonald.

Leinster were now very much on top and continued to squeeze Munster despite playing into a strong breeze for the second half. On 35 minutes Clondalkin star Mikey Russell broke through the Munster defence and raced up the left wing to score Leinster’s third try of the afternoon. The unconverted try gave Leinster an 8 – 19 lead with just a few minutes remaining on the clock. Munster heads never dropped and their endeavors were rewarded with a late unconverted try through their centre Craig O’Connell, leaving the score at 13 – 19 on full-time. 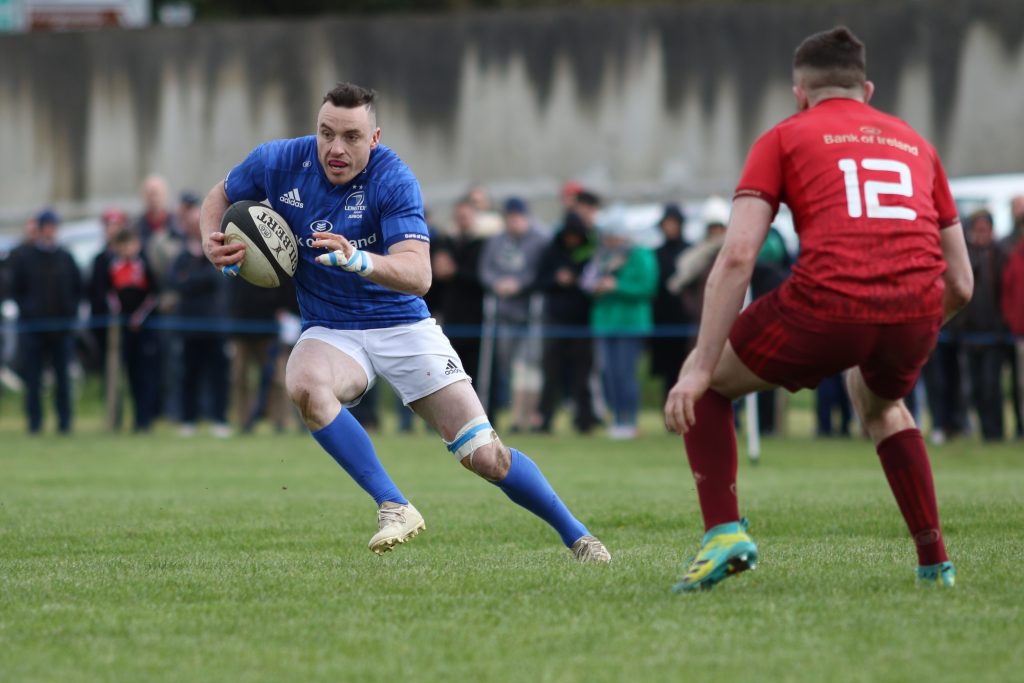 This was a very fine team performance by the Leinster juniors. The pack in particular led the way and though it may seem unfair to single any one player out for special mention, it must be said that tight head prop Robert Farrell (Dundalk) was particularly effective both in the tight and the loose all afternoon.

Speaking with Leinster Rugby Juniors Head Coach Enda Finn after the game, he said ‘We never once underestimated the challenge Munster were going to bring. They were excellent in the first half and we were fortunate to be only 5 behind at half time. The wind was difficult to read and playing against it definitely suited us in the second half. Allied to our strong bench it ensured our performance in the last 30 minutes was enough to get us the win.  We now expect to build on the momentum garnered from that last 30 minutes, and bring that into the Connacht game next Saturday.’

Well done to the team, coaches and management and to the travelling supporters. Next up is Connacht Rugby Juniors in Wicklow RFC next Saturday at 2.30pm.