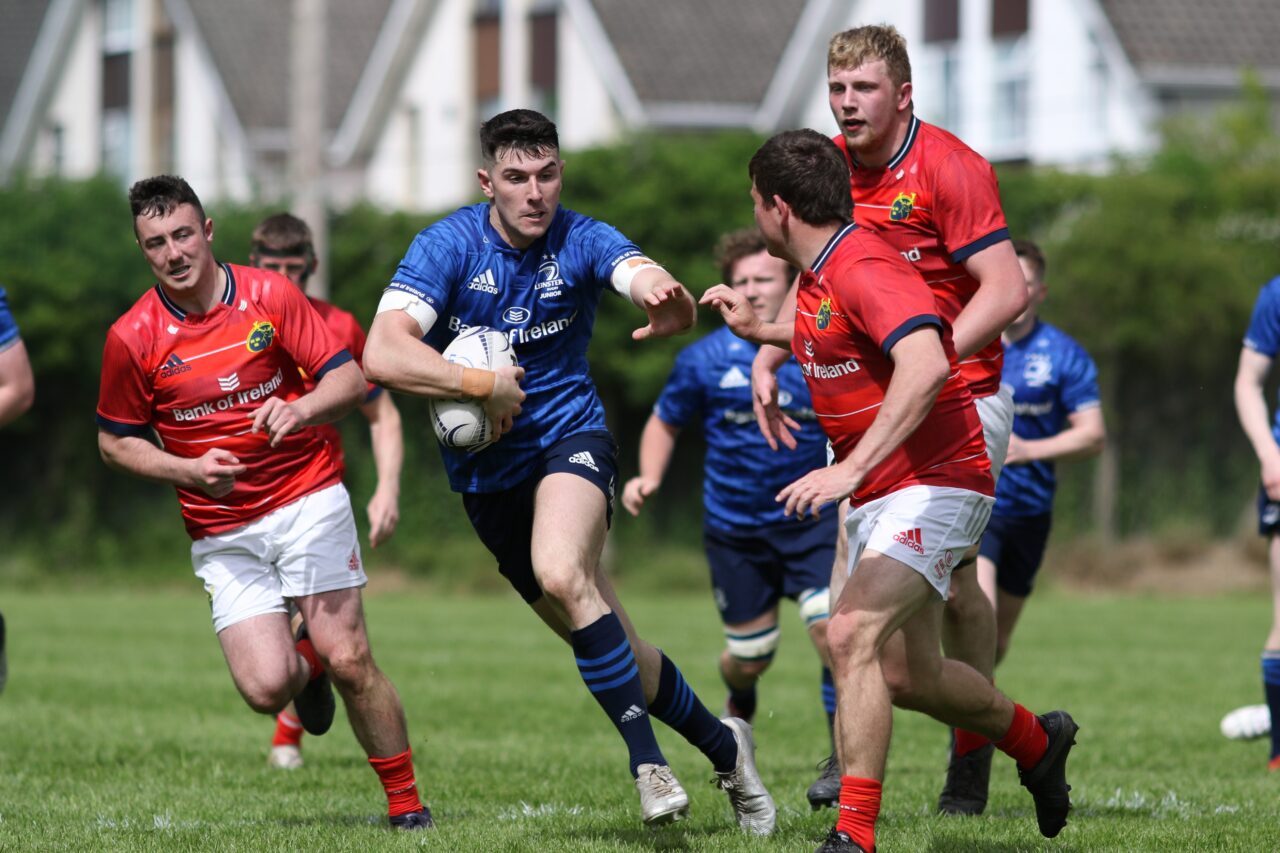 New Ross was the venue for the Leinster Rugby Juniors final game in this year’s interprovincial series.

The club did themselves and the province proud as their grounds sparkled in the sunlight. The pitch was in excellent condition and the recently refurbished clubhouse provided an excellent venue for the teams, dignitaries and supporters who were in attendance.

The huge crowd were treated to great entertainment pre-match with local New Ross & District Pipe Band playing many rousing tunes. The supporters then enjoyed an exciting and high-scoring game of rugby.

This was a must-win match for Leinster who also knew that they would almost certainly need to score four tries for the bonus point and run up a decent score. The chance to retain the cup was incredibly tight with Leinster also hoping that Ulster would do them a favour by beating Connacht, though by not too big a score.

The game had begun to swing in Munster’s favour at this point and the men from the southern province were soon to be back in the lead. A penalty on halfway was kicked to the corner giving the Munster forwards an ideal platform to launch an attacking maul towards the Leinster line. Munster hooker, Ricky Whitney dived over for the try which was converted. 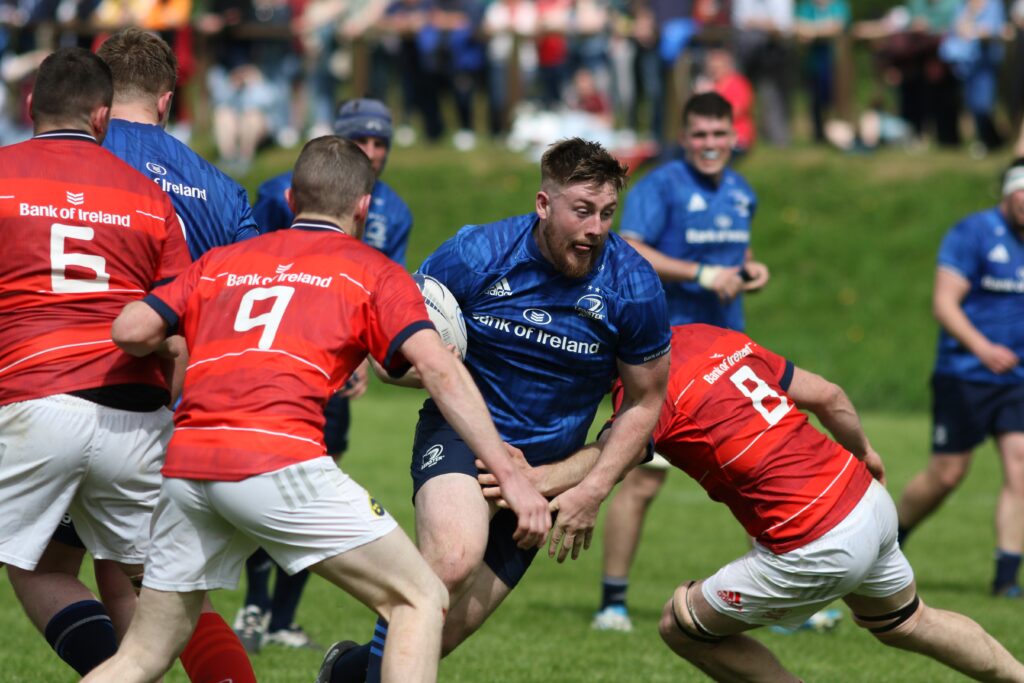 Leinster struck back with a Miller penalty to close the gap to 13-10. However, just over half an hour of the first half played, disaster struck for Leinster when Jesse Smith intercepted a loose pass and ran in for an unconverted try.

The lead could have been even greater if a very kickable penalty just outside the Leinster 22, almost directly in front of the posts had been converted. The kick was missed and Leinster were relieved to reach half-time just eight down.

Leinster had played well in the first quarter but had come under severe pressure from Munster in the second quarter and they knew that they would have to substantially up their efforts in the second half if they were to have any chance of retaining the interprovincial trophy.

The lads did not disappoint. Shortly after the restart, the Leinster No 8 Ruadhán McDonnell scored an excellent try after the forwards had taken possession and went through a series of pick and go drives towards the Munster line. The tricky conversion was missed but Leinster had garnered some momentum. 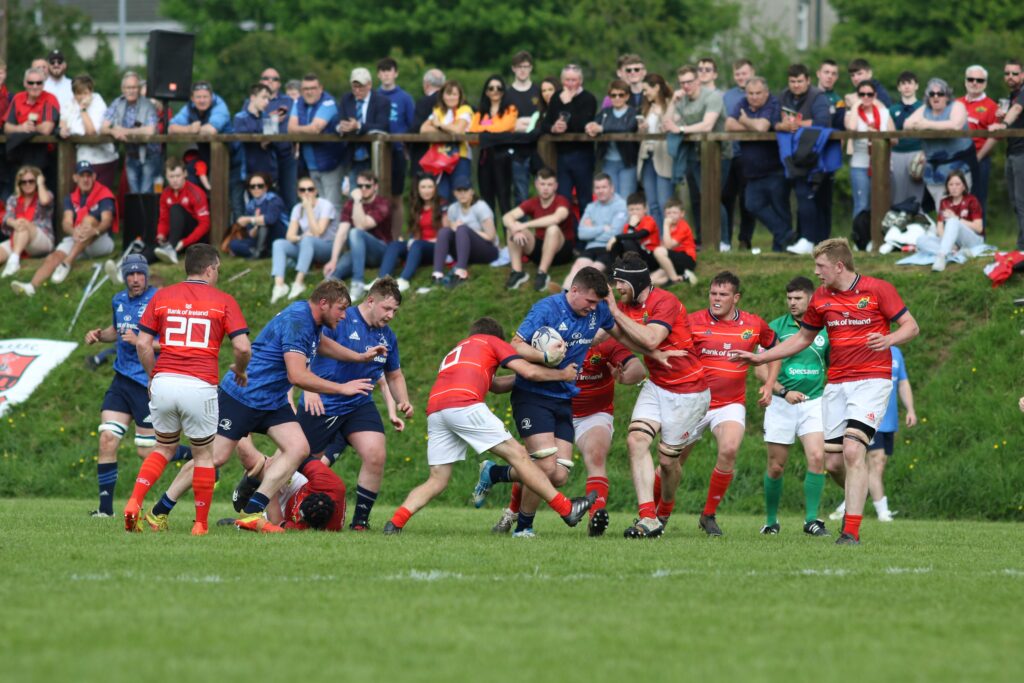 There was a minute silence immediately before kick off in memory of Shane Hickey who tragically passed away during the week. Shane was a member of Edenderry RFC and played on their U-16 side.

Within two minutes of the start, Munster were awarded a penalty to the right of the Leinster posts near the 22-metre line. The kick was good and Munster had an early 3-0 lead. Leinster restarted and quickly got back into the match with a period of possession and territory deep inside the Munster half.

A penalty was kicked by out-half Craig Miller to touch and from the resulting lineout, Leinster’s forwards drove hard towards the Munster line. Captain Wes Carter dived in for Leinster’s opening score and Miller added the conversion.

The game was an even contest but Leinster did enjoy some good possession in the opening quarter which they unfortunately could not convert into further scores. On 18 minutes, flanker Zach Jungmann was penalised for a high tackle and received a yellow card.

Three minutes later, Leinster, defending a Munster thrust, were deemed to have strayed offside and Tadhg Bennett kicked the penalty from directly in front of the posts to bring Munster back within a point. 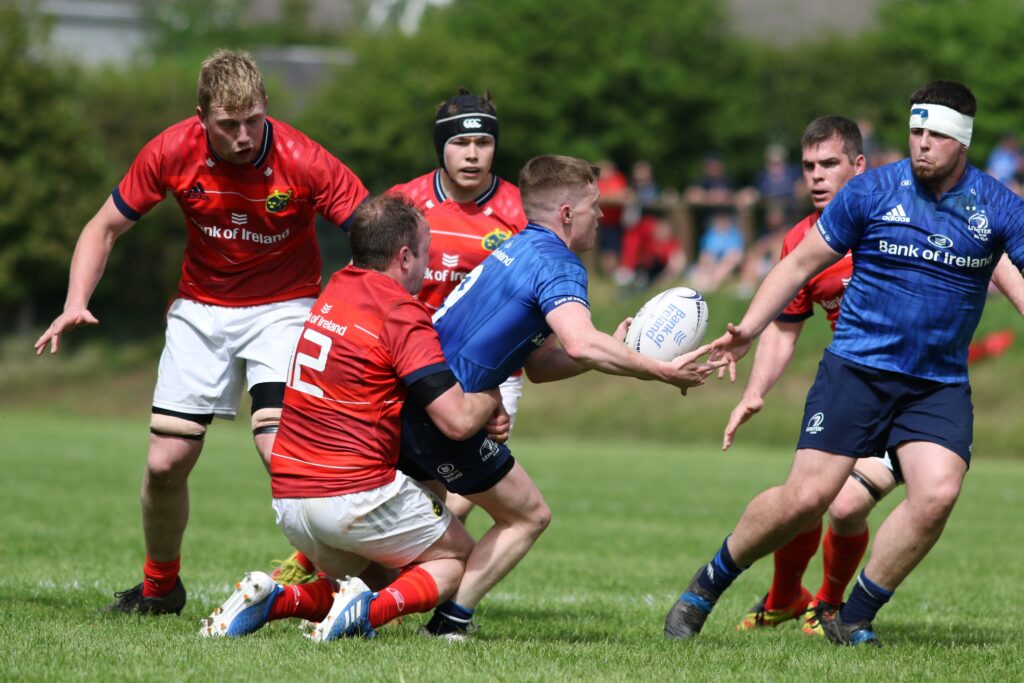 Just a few minutes later, Leinster were back in front after replacement, JJ McIlwrath, dotted down with Miller converting. The Leinster boys were on fire now and everything seemed to go right for them. Within a couple of minutes of McIlwrath’s try, Leinster had scored the bonus-point try through Wicklow’s David Nicholson. Miller again added the conversion and with just 12 minutes of the second half played, Leinster’s three tries had given them a 29-18 lead.

For this brief moment, Leinster were sitting top of the table and looking like they might retain their title. Alas, it was not to be.

Munster did not allow their heads to drop, even after they lost their inside centre to the bin with a yellow card. A man down, Munster were next to score. Their try was converted and the gap had closed to just four. Munster made some changes and their bench added zest to their attack just as the Leinster lads began to tire in the hot sunshine.

Two further tries in the final 10 minutes, each converted, gave them a 39-29 lead. The Leinster lads never gave up and came close to getting a late consolation try. However, the ball was turned over and the game ended with Munster securing the title.

Credit to a strong Munster side who did not crumble when the game seemed to get away from them in the third quarter of the match. The Leinster lads were disappointed but they could be proud of the incredible effort they put in on the day. This was an exciting encounter and a great advertisement for club rugby in Ireland.