Kane and Jack Rule the Laighin Out… 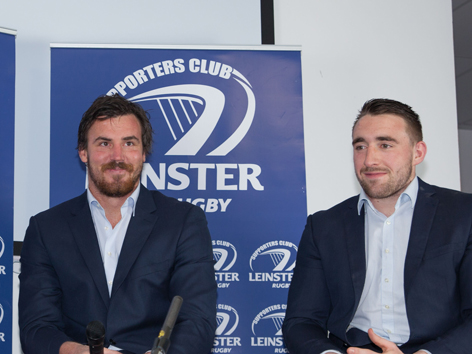 On this occasion, we were thrilled to welcome Messrs. Kane Douglas and Jack Conan to the stage to share their thoughts, musings and TV soap recommendations. Our Master of Ceremonies for this event was Cian Nolan, a long standing, dedicated Leinster supporter.

Cian started by congratulating both players on their part in the just achieved bonus point win over a spirited Zebre team.  Kane alluded to the team being “a bit slow out of the blocks”, but persevering to earn a hard fought 5 points. Upon an enquiry regarding his leg, Jack dismissed any concerns about him, telling assembled supporters that it was more dramatic than it looked and that he would be fine.  This was very well received by Jack’s fan club, who were gathered close to the stage to catch his every word.

When asked about how much the loss to Dragons five day previous was to them for the Zebre game, both players confirmed the importance of the match analysis in identifying the areas for improvement. They also stated that there was a determination not to suffer the frustration felt by the players after Sunday’s loss again.
Cian then turned the spotlight specifically on Kane, inviting him to share his memories of playing under Michael “Cuddly” Cheika at the Waratahs.  Kane recounted that he enjoyed his time with the team under Cheiks, notwithstanding that it was somewhat different to his previous experience.  Comparing Cheiks to his present coach, Kane told the attentive gathering that he stayed with Matt (O’Connor) for a couple of nights when he was looking for somewhere to live here in Dublin, this was not something he could have seen happening with Michael Cheika.

When asked about deciding on Leinster as his new team, Kane cited a number of motivations for him coming here, not least of which was “a few beers” in Dublin with his Wallabies teammates, which got him in a spot of bother down under at the time. He also told us of meeting Leo (Cullen) when he paid a visit to Michael Cheika some time back, put Leinster on the map for him.  The success of Leinster Rugby, the amount of international players in the squad, and the desire to spend some time in Europe improving his game all contributed to Kane packing his bag and joining the squad. The supporters quickly showed their appreciation of Kane’s decision.

Our MC then turned his attention to Jack, noting his meteoric rise in the game and his inclusion in the Ireland training squad and the Wolfhounds team. When asked for his impressions on all this, Jack stated that it was beyond his expectations, having originally set himself an objective of ten starts with Leinster for the season, which has already been surpassed.  The call up to the Ireland training squad was a very exciting opportunity for him to gain valuable experience. Jack acknowledged that there were a number of senior players ahead of him in the pecking order, but he believed that the experience of training at that level can only benefit his game.  His ambition is to bring what he has learned at camp to his training in Leinster, and rated the whole episode as a fantastic experience which he was delighted with.

Given the events of previous days, it was impossible for the night to conclude without mentioning one of Leinster’s long standing heroes, Shane Jennings.  Cian invited the boys to share their thoughts about Shane, with Jack quick to begin listing the qualities that make Shane such a valuable member of the squad. Jack cited Shane’s leadership as something that will be sorely missed, along with his generosity of time to advise and coach younger players in the group.  He also asserted the Leinster Rugby and all its’ players owe a lot to Jenno for setting the bar high and encouraging all to strive to reach it. Jack finished by saying that Shane will be a huge loss to all concerned with Leinster Rugby.

Turning the attention back to Kane, Cian enquires as to which of the many great players in the Leinster set up were instrumental in his decision to come and join Leinster.  Kane harked back to the Wallabies playing the Lions and playing against Jamie Heaslip, Sean O’Brien and Rob Kearney as being a stand out experience.  Kane went on to explain about the logistical differences between the Waratahs and Leinster, how the Leinster squad is so much bigger than he was previously used to, allowing for squad rotation, which wasn’t possible back at the Waratahs.  He also had some very complimentary things to say about playing with the academy players, noting that they “play their little hearts out”, of course alluding to the very competitive environment within the Leinster camp.  Josh Van Der Chop (Flier) came in for particular attention from Kane whilst he mused about just how many number sevens he has played with since coming to Leinster.

Jack then fielded a question regarding nutrition and the part it plays for players in their recovery after a tough game. He explained that nutrition is a huge part of the recovery process, with post match protein shakes waiting for the players.  The nutritionist then follows them up with fish oils and vitamins.  After that, ice baths, compression, EMS (Electrical Muscle Stimulation), are among the options open to the players. Jack explains that recovery regimes are somewhat personal, and each player has his own preferences.

Having patiently built up to the moment, our host Cian finally got to the serious business, which was Kane’s favourite Australian soap opera – Neighbours or Home and Away?  Home and Away got his vote, and he then went on to display an alarmingly in-depth knowledge of said programme. When the same enquiry was made of Jack, he informed all listening that EastEnders was his soap opera of choice.  Who would have thought that our stars of Leinster Rugby would have time to keep up with the TV soaps!

Cian concluded the evening’s proceedings by asking all present to show their appreciation to both players, which was done with some gusto.

Whilst on the subject of appreciation, we at OLSC Towers would like to convey our thanks to all at Leinster Rugby who conspired to make the evening happen, but most particularly we would like to sincerely thank Kane and Jack for giving of their time and entertaining all present so splendidly.

See photos from the Q&A here
Video footage of the Q&A (courtesy of www.pilotmediadesign.com) can be seen here.