Kearney: “Every final is a big one” 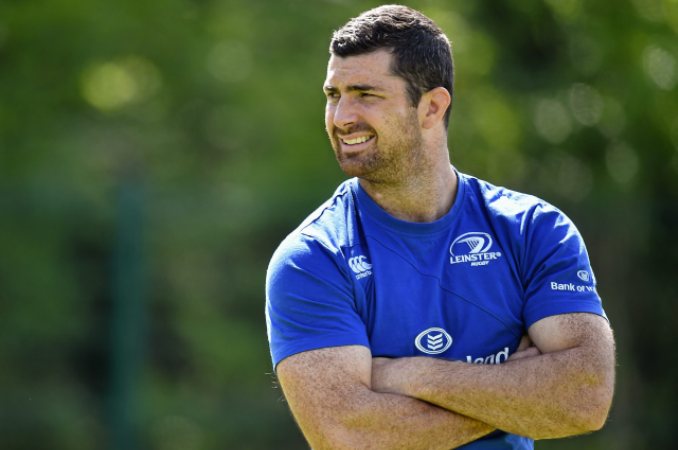 This will be Leinster’s eighth final since Rob Kearney joined the province for the 2005/06 season. In that time he has lifted the Heineken Cup, the Amlin Challenge Cup and the PRO12 trophy in stadiums like Twickenham, the Millenium stadium and Murrayfield.

So where does this Saturday’s home final in the RDS against Glasgow Warriors rank among them all?

“Every final is a big one, isn’t it?” Kearney said, speaking to the media in Leinster HQ this week.

“Playing at home is always much nicer than playing in an away final. I suppose given the nature of how we finished up the last four or five years with silverware this game’s probably pretty important for us given the transition that’s occurred over the last season.”

There has been a lot of talk of transition in the Leinster camp this season. Key figures have moved on, young players are breaking into the team, and these changes have been a challenge that needed to be overcome this season. But Kearney says there are “challenges every year” and that the responsibility lies with the experienced players to keep things moving in the right direction.

“We had a challenge losing Joe and Jonny and Isa this year. We’ve done reasonably well without. We’re still in the hunt for a trophy which is pretty good. You get these obstacles every year, it just means there’s more onus on the guys who are there to make sure things keep going forward.”

If Leinster want to “keep going forward” then that means they will have to go through Glasgow Warriors this Saturday in the RaboDirect PRO12 Final. Kearney is fully aware of the dangers posed by Gregor Townsend’s men and that whoever plays for Leinster on the day will have to be at their very best.

“I think their defence has been the best – (Glasgow have won) nine games on the bounce now. They’re a team that when you let them into your own 22 they come away with points a huge amount of the time. Two things from that are we have to play field position pretty well, our discipline, which has been poor over the last four or five weeks, we’ve given teams too many kicks at goal, and when you get to final stage you can’t do that.”

“I think when we get (our defence) right it’s been a massive weapon for us. Our defence was poor last year – we soaked too many tries and I suppose because our attack was so strong last year it sort of just kept us ahead of the ball every time. It has been good, there’s still a huge amount we can do, but when we get off the line and we take the opposition’s space, we look like a different team.”

The semi-final win against Ulster was a perfect example of sticking to a plan, staying calm and getting the rewards for that at the end of the game. If the final is just as tight, it will be important to do the same again; stay mentally strong, stick to the plan, avoid getting frustrated and the rewards will come.

“If something’s not working or if you’re struggling on a given night, piping up and pointing fingers can generally be the worst thing. You have to sort of stick to game plans a little bit. You can’t get frustrated. When you get frustrated that’s when things start to go wrong and you give penalties and you get sloppy. You have to be patient with these things too. If it works in training you just have to hang in there and hope that your time will come.”