Kearney & O’Brien in for Rebels clash… 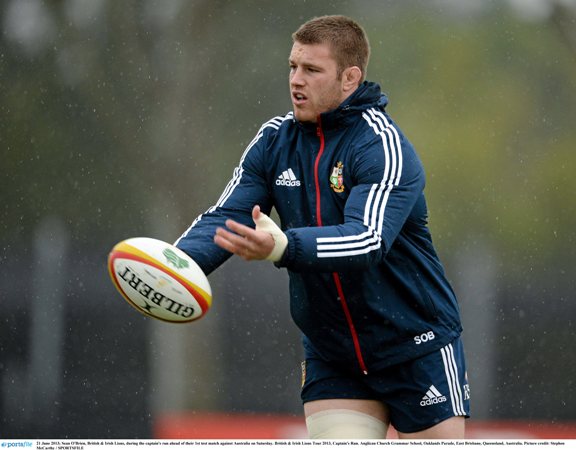 The British & Irish Lions have announced the team to play the Melbourne Rebels at AAMI Park in Melbourne on Tuesday (KO: 11am) and the side features two Leinster players – full-back Rob Kearney and wing forward Sean O’Brien…

Four of the Lions team that beat Australia in the 1st Test on Saturday – Dan Lydiate, Geoff Parling, Richard Hibbard and Dan Cole – will start.

England and Leicester Tigers second row Geoff Parling will captain the side.

Parling’s club-mate Manusamoa Tuilagi makes his return, having not played since sustaining a shoulder injury in the Queensland Reds game. He is joined in the centre by England team-mate Brad Barritt.

Tullow’s O’Brien returns to the No 7 jersey after two runs on the blindside, while fullback Rob Kearney plays his third match of the tour and Owen Farrell starts at fly-half.

Tour Manager Andy Irvine said: “We are obviously delighted to start the Test series against the Wallabies with a win but this game is very important to us in terms of keeping the momentum going. Those playing on Tuesday have a major part in delivering this and at the same time keeping the pressure on for Test match selection.”

Head Coach Warren Gatland added: “I am very pleased for Geoff. For him to be part of a winning Lions Test side is very special and he has shown throughout the tour that he is one of the many leaders we have in the squad so we are looking forward to seeing him in that captaincy role.

“It is also good to get Manu back on the pitch after a frustrating injury. This is a good chance for him and others to put their hands up.”