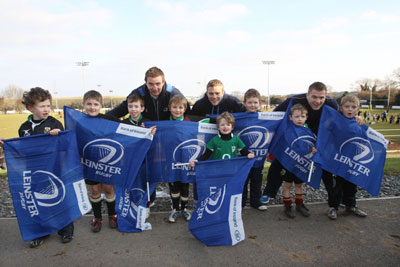 Fifty-five teams from 25 clubs in Leinster took part in what turned out to be favourable weather.

The excitement on the day was enhanced by the appearance of some of the Leinster players Jamie Heaslip, Ian Madigan and Paul Ryan, who spent considerable time visiting the various squads and generally encouraging the players. It was interesting to see the first-time player’s enthusiasm to meet those who have reached the pinnacle of international and provincial rugby.

The festival is held annually in honour of a young member of DLSP, Kieran Burke, who died in January 2004 aged six. The idea for the festival came about from conversations with coaches of this age group who commented on the lack of a suitable tournament for those just starting to play rugby. They could see that their players would appreciate the excitement of a festival of this nature, but there was no suitable event in the calendar.

It was decided to pay tribute to Kieran and his great enthusiasm for rugby by hosting an event for his age group. Initially the idea was to hold a single event however it proved so popular it was decided to keep going. Since then it has grown into the largest rugby event dedicated to U-7s in the country. It is a great chance for the teams to show their skills. Another important aspect of the event is that it gets coaches, who are often just starting on their new ‘careers’, to network leading to camaraderie among their peers and future fixtures for the young players.

At the end of the day St. Brigid’s and St. Mary’s were asked to look after the Kieran Burke Trophy for 2011. The trophy was presented by Kieran’s parents Karl and Kate together with Jamie Heaslip.