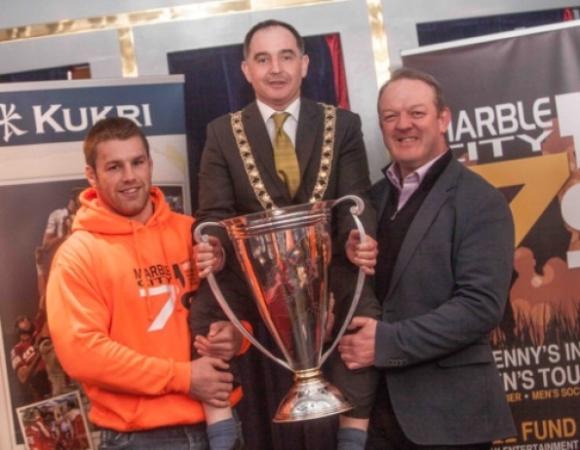 Rugby on Noreside has never been on more of a high than it is at the moment, with Kilkenny RFC – home of such legends as Mick Galwey and Willie Duggan – set for top-flight action next season following their splendid Leinster League Division 2A triumph.

Maintaining the feel-good factor around the club right now is an exciting new venture set to take place next month. The inaugural Marble City Sevens will be held at the club’s Foulkstown grounds on 29th June with 32 teams competing in three divisions – Men’s Premiere, Men’s Social and Women’s Social. All games will be overseen by Leinster Rugby Referees, ensuring top quality rugby in each section. Teams from all over Ireland have already registered but there are still one or two places available.

The competition is being run in conjunction with The Gathering 2013 and, appropriately, features the inclusion of a number of overseas teams, which will add an international flavour to the event in addition to boosting the local economy.

The Marble City Sevens was launched on 23rd February in Langton’s Set Theatre, Kilkenny. The club used the opportunity to show off its proud array of past and present international rugby stars.

Among them were Willie Duggan, Ned Byrne, Mick Galwey and Caroline Mahon, plus current Ireland under-18 starlet Sean Moran. Also present was Ireland hero and Lions selectee Sean O’Brien, who was allowed over the Carlow border and given honorary Kilkenny citizenship for the night. The Tullow Tank kindly took time out from the Ireland squad’s Six Nations preparations to show his support for the venture.

The club’s long-term aim is to hold the competition on an annual basis and, with the support of Leinster Rugby, develop it into the biggest of its kind in the province. Barbecues, pitch-side entertainment, a commercial zone for sponsors and an evening of ceol agus craic will add to the festival atmosphere next month.

A special highlight will be the appearance of Leinster Rugby’s latest acquisitions, the Amlin Challenge Cup and PRO12 trophy. It’s also hoped that members of the all-conquering Irish women’s rugby team will be present with their silverware.

All are welcome to join in the festivities. A fabulous day of fun is guaranteed for everyone, spectators as well as competitors.

For more information and to register, check out our website: www.marblecity7s.com