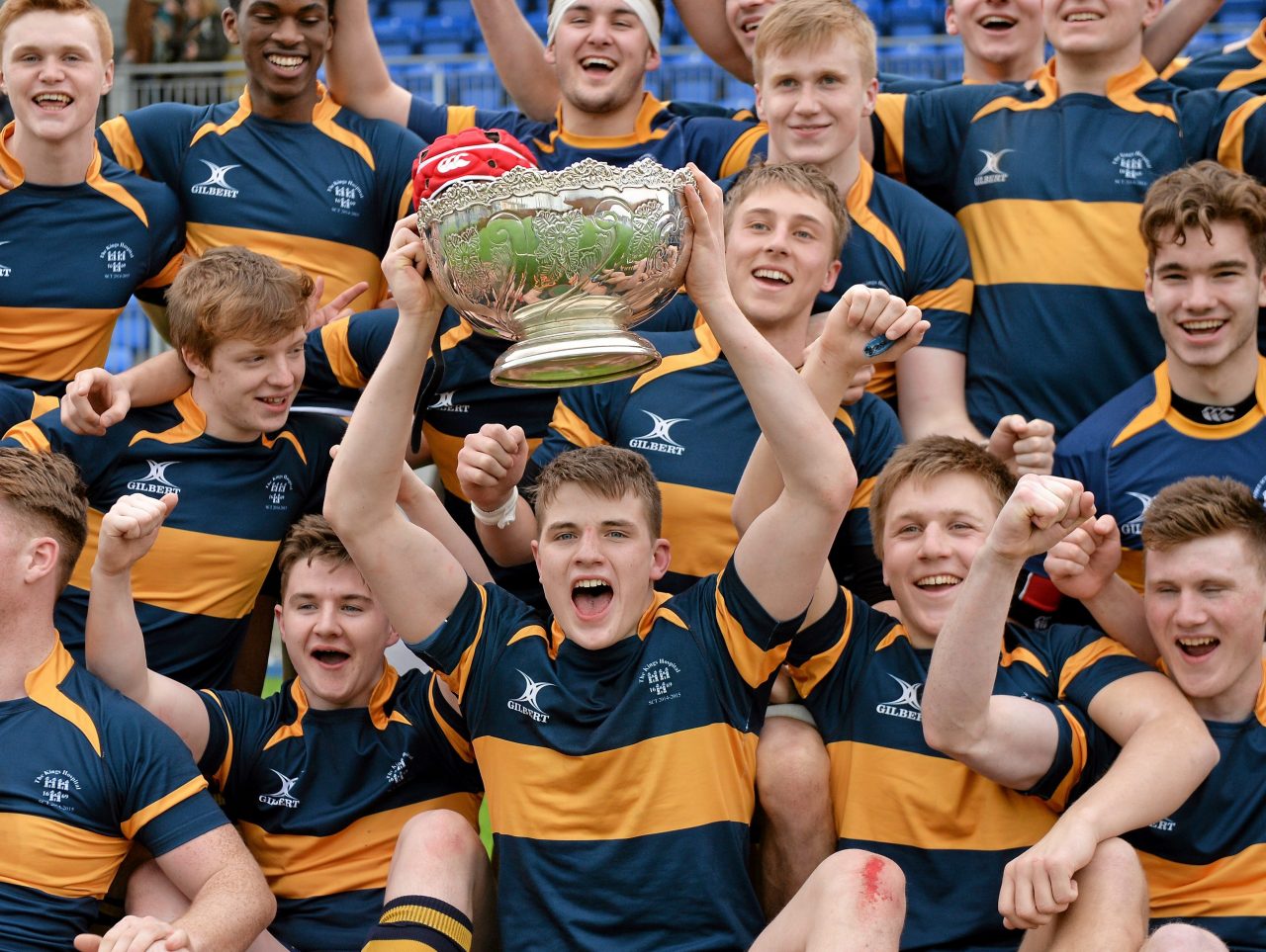 The force was with KH from the kick-off as they came forward to earn a penalty for Paul McCullagh, which skirted the outside of the posts.

Castleknock simply couldn’t exit their half. This was a recipe for disaster.

The scrum and tight forward play was working a treat for KH. They forced another penalty which was promptly dispatched to the corner.

The lineout was clean and the drive strong until scrum-half Roan Sharkey peeled away and plunged for the first try.

Centre McCullagh converted for 7-0 in the eleventh minute.

This had to come as a wake-up call. But, KH number eight Matthew Bursey took off for 30 metres and full-back Daniel Courtney tickled a kick through to keep the pressure on.

A clever chip from Sharkey had Rob O’Meara turning and the alert wing did well to cope with a tricky situation.

Still, there was no escape. Hos’ harried without the ball and carried effectively with it to have their number eight Bursey rounding the cover for the second try in the 20th minute.

At last, ‘Knock found room to breathe from a swift chase of the restart. Full-back Patrick Murtagh looked to have a go. When lock Conor Stinson took in a lineout, they moved a maul and collected a penalty.

Castleknock went for the corner pole from there. Bursey was in at the side. They opted for the lineout again. This was stopped short for a scrum. They drove around the side. Wing Donal McConville surged on the inside shoulder and openside Bilal M’Uazzam crossed close to the posts to make the conversion a formality for loose-head Geoff Brookes in the 27th minute.

They came again to prosper from a mix-up in midfield, centre Marc Boucher seizing on the ball, to find a penalty for Brookes to make it 12-10 on the half hour.

It was game on.

It nearly got better for ‘Knock when Boucher latched onto a broken ball and showed exceptional skills to take it 50 metres before the oval ball betrayed him.

There was still time for KH to ask questions O’Meara had the answers to behind his line as the half-time whistle sounded.

Hos’ came out re-engerised. Full-back Courtney kicked strongly from the back and McCullagh was off target from a 39th minute penalty.

There was commitment to direct rugby from prop Calum Petit and flanker Sam Charman. When the space appeared, out-half Rob Lawless had the sense to put McCullagh away down the tramlines and his strong fend propelled him onto the left corner for 17-10 in the 44th minute.

In the aftermath, Castleknock fly-half Adam Chester was binned for his follow up actions. This did not deter them from charging up-field to draw a penalty which Brookes could not make count.

It turned out to be against the run of play as KH thundered onto the ball with Lawless leading the way. It took the vigilance of Andrew Hobson to save the day from a Conor Murray-type of kick into the in-goal area.

KH were handed an easy three points for McCullagh as a consolation and a 10-point lead in the 56th minute. They needed it.

Castleknock came calling through full-back Patrick Murtagh and worked enough space on the left for replacement Carl Keogh to make it over for 20-15 on the hour.

The indiscipline of both schools showed up when referee David Stronge yellow carded Castleknock captain Richard McHugh and KH captain Will Potterton. Bursey nearly made the extra space tell on a burst into the 22.

This was followed by McCullagh’s acceleration from Bursey’s pass, scrum-half Liam Salmon making the try-saving tackle.

While there was time, there was hope for ’Knock. They came on last foray, turning down three points for the pursuit of the five that would put them on level terms.

But, Brookes could not ground the ball over the line. There was one final scrum where Castleknock were found to be driving across on the angle.