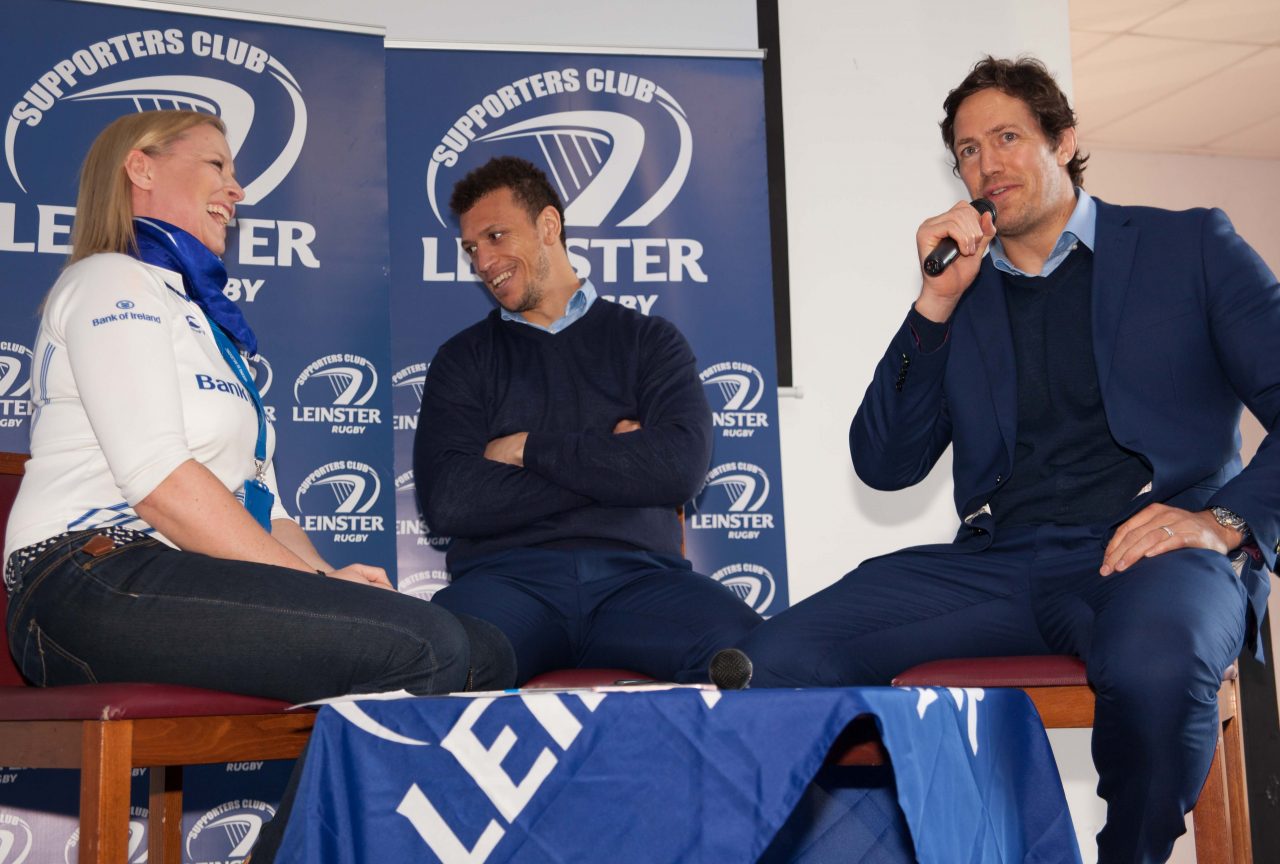 Both players answered plenty of questions, told us who was the worst to sit beside in the changing room and revealed their favourite moments while wearing the Leinster jersey.

Firstly, both gave their take on the Cardiff match. Both highlighted inaccuracies in the performance with Zane saying it was “not up to our standard” and Mike commenting that “training during the week wasn’t as good or as sharp as it had been, so there’s plenty for us to work on heading into the big one.”

With both players due to head to pastures new this summer, Sharon asked what they would miss about playing at the RDS.

Mike highlighted the tremendous match day support and atmosphere generated at the stadium.

“Obviously, I’m going to miss the great support, it’s always amazing running out at our home games, it’s like the 16th man getting behind us.”

Zane was quick to echo those comments: “the stand, the ground and everyone around here. The roar of the crowd will all be missed. It’s been an enjoyable time here and there’s a bit left hopefully.”

Thoughts then turned to international rugby highlights, with both selecting their first taste of Test rugby as their favourite moments.

“My first cap against Scotland with my wife and mum in the stand was a special moment for me,” said Mike.

Similarly, Zane said, “that first cap for your country is always special and playing at a World Cup would have to be another of mine.”

Now it was time to hear the dressing room banter. Mike decided to out his namesake Mike Ross as the worst player to get changed beside joking his “hygiene is not the best” and that there’s some questionable choices in boxer shorts made by the tighthead.

Zane took the more professional approach saying that “most players are in their own corner, listening to music, being in their own space becoming aware of what’s needed”.

Both players agreed who had the worst taste in music with Michael Bent the unanimous choice for being into “that goth stuff”, according to Mike.

When it came to highlights in a Leinster jersey both pointed to winning the PRO12 in their debut season.

While Zane also had a few positive words to say about Dublin as a city.

“My first season winning the PRO12, beating Glasgow at home,” Mike said when asked about his Leinster highlight.

“It was an unbelievable day and I remember Zane carving up in that game so that’s the biggest highlight winning a trophy in my first season.”

“So far that would be one of the memories I’ll take with me as well,” Zane said.

Finally, both players were asked to name a player that they admired growing up.

“I’m from the rough part of South Africa so there weren’t many great role models but I try to take things from everything that’s happening in front of me and learn to make better decisions.”

Mike McCarthy on the other hand turned out to be a secret Jonah Lomu fanboy:

“I suppose Jonah Lomu. I had all the posters, DVDs, I was obsessed with him. I used to love watching him growing up. Obviously, I don’t play the same position as him and he’s a bit quicker.”

The OLSC would like to thank Zane and Mike for joining us in the Laighin Out and wish them both the best of luck for the rest of the season and their future careers away from Leinster.

See photos from the Q&A here.