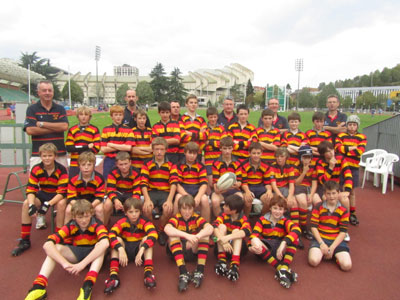 This trip was postponed from April due to the Icelandic volcano so the effort put in by the organisers was doubly appreciated by all.

Both games were played in a fair and friendly spirit with Lansdowne’s speed and skills being a good match for the physically strong Basque teams. As can be seen from the photo above all three teams socialised after the final whistle and language was no barrier.

The boys were kept updated of events in the RDS as Leinster played Racing and news of Leinster’s win rounded off a great day for the team.