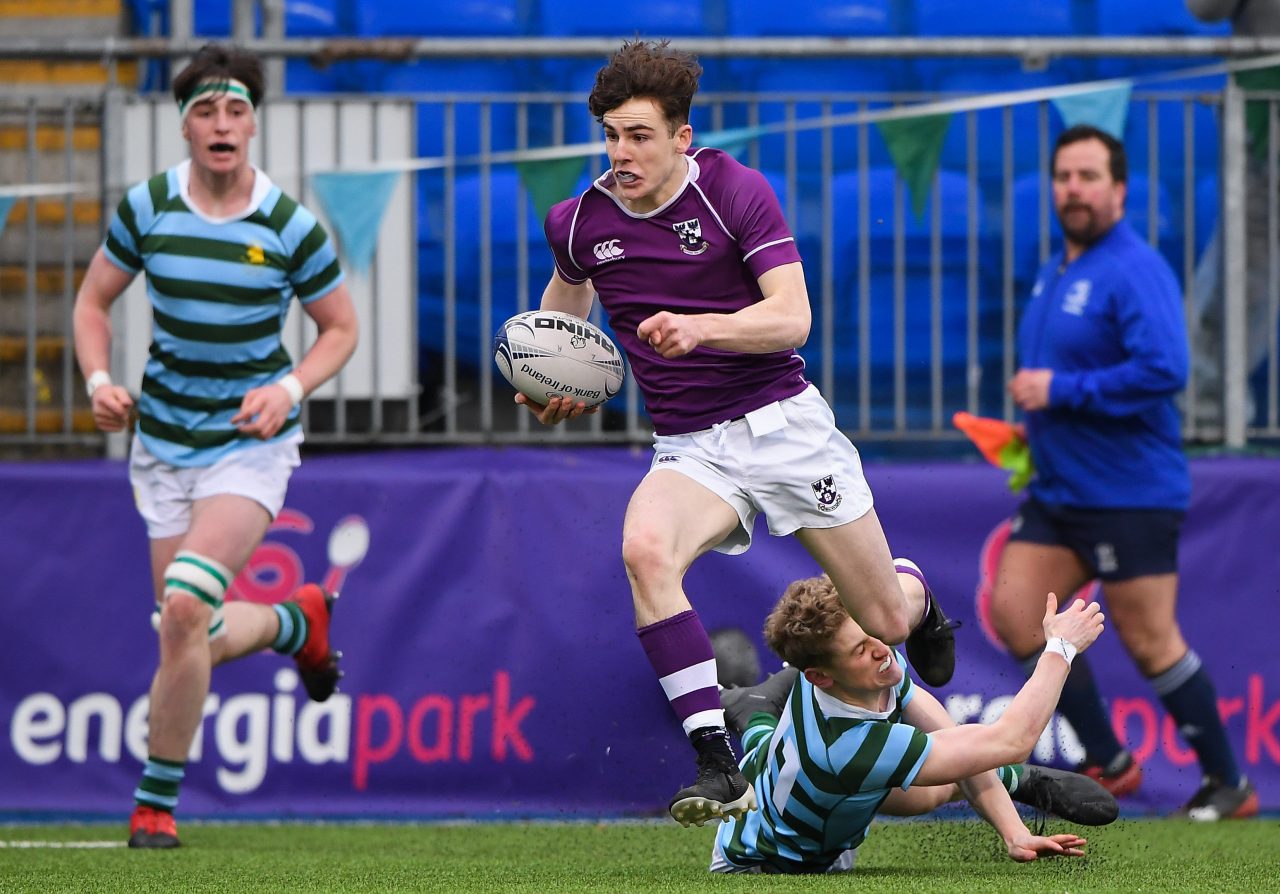 Clongowes Wood College are the fourth and final team through to the Bank of Ireland Leinster Schools Senior Cup semi-finals.

They ran out comprehensive winners over St Gerard’s School thanks to a final quarter in which they scored over 20 points, they also had eight different try-scorers in the game.

It took just a couple of minutes for the purple wave to rain down on St Gerard’s as Clongowes drove forward with intent.

A penalty from Oisin Devitt was quickly followed by a try for Michael Spillane. The winger cut back inside dumbfounding Gerard’s and darted for the line after the early yards had been made by a wonderful break from former Mayo minor gaelic-footballer Rory Morrin.

The Bray school realised the need for prompt action and quickly cut the deficit back in half when Saul Fitzpatrick’s skip pass on the in-goal line found Craig Kenny who dived over at his leisure.

Although that score would have disappointed Clongowes after the positive start, they didn’t show any signs of pessimism.

Their back row, particularly Calum Dowling, continued to carry into contact, winning with regularity and it was one of those strong runs from Dowling that made the ground for their second try.

Hooker Eoghan Cumbers bundled his way over from close range just after the quarter-hour mark and Oisin Devitt slotted the extras once more.

A third came by way of Diarmuid McCormack, again Dowling and Morrin were influential in the build up before the No 8 had to use every inch of his wing span to get the score.

Another converted Gerard’s in the 28th minute, this time from Brian Glass rejuvenated them and they quickly came back looking for me to cut into Clongowes 24-12 lead.

And U18 Schools hooker Freddy Happonen made that pressure count when he pulled off the back of a lineout maul to score.

It took less than five minutes of the second half for that gap to be closed completely. A Patrick Burke intercept created the opening for Kenny to get his second try before the out-half converted for parity.

The game had long been a thrilling contest but with the scores now level, there was an added layer of intrigue.

Devitt saw an attempt at three go left of the posts in the 46th minute.

They didn’t have to wait too long after that to jump back into the lead, replacement Harry O’Neill forced his way through from close range and Devitt found his range again to convert.

And, just minutes later, Dowling’s carrying proved troublesome once more for St Gerard’s when he burst through before off-loading to Evan O’Boyle who got their second in quick succession.

Clongowes started to stretch their opponents a little bit more and soon replacement outhalf David Wilkinson went into the corner to open a 19-point lead.

More followed for winger Sean Sexton and Jack Kearney as Clongowes opened up a commanding lead that did not show the close proximity of the teams throughout.