Legends to line out in Donnybrook this Friday… 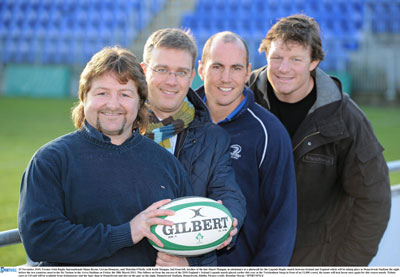 Some of the biggest names in modern rugby history will be on show when Ireland hosts the Legends match against England at Donnybrook this Friday (KO: 7.30pm), the night before the two countries meet in the Six Nations….

Following the success of the 2010 England v Ireland Legends match played last year at the Twickenham Stoop in front of an 11,000 crowd, the teams will lock horns once again for this return match.

Tickets will start at Main Stand €;15, Stadium €;10, Concessions €;5, unreserved seating, and are now on sale, from the following website www.ticketmaster.ie …Supporters will also be able to pay at the gate.

The money raised from the match will be donated to the IRFU Charitable Trust in Ireland and to improving the lives of Inner City Youths through Sport and Education in England in what is expected to be a highly competitive clash between the two rugby nations.

The game is being played for the Stuart Mangan Memorial Cup, currently held by the Irish Legends who were the narrow victors, by 17-15 in 2010.

Both team captains, who have been the driving forces behind the Legends matches to date, along with Jason Leonard and Len Dineen, would like to make this an annual fixture, playing on the eve on the International match and capturing the spirit of the England A fixtures of days gone by.

Looking forward to the game Shane Byrne said: “It’s great to welcome the England Legends to play at Donnybrook, for a return match. Like all ex rugby players when looking at games you still feel that you could do all the wonderful things you did while you were a little younger, fitter and probably had more sense! But we’ll be looking to put on another winning performance on our home turf. Let’s hope that this occasion will become an annual fixture for rugby players and supporters – and a fantastic way to make some money for very worthwhile causes”.

With generous team sponsorship from reinsurance group Validus Re, this promises to be an evening to remember at Donnybrook…