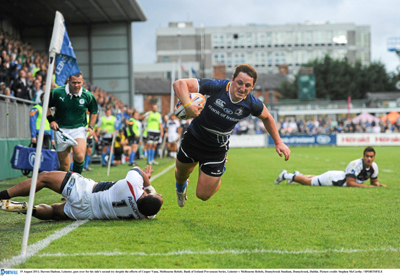 Speaking after the game, Leinster Coach Joe Schmidt said: “I’m really happy with the win to be honest because we used 26 players including a number of 1st and 2nd year Academy players and I thought that they all showed a lot of character, especially in the second half.

“When you look at the calibre they were facing, such as the likes of Lipman, Cordingley, Mortlock and Somerville, I thought that we did well to get back into the game. I was pleased with Berky (Mat Berquist). He’s a guy who I’ve known since he was 15 and he’s a very calm player and someone coming from the Crusaders who can bring a bit of experience to our side.

“After six weeks of pre-season we were inevitably rusty at times and we’re realistic to know that we made mistakes, but it was a good win and we’ve something to build on for what will be a very tough Northampton side next Friday night.”

The Rebels began brightly and a sweeping backline move in the fifth minute ended in a strong tackle by Leinster wing Darren Hudson on the advancing Richard Kingi inside the Leinster 22.

Eventually the Rebels’ pressure told and an infringement at a ruck three minutes later led to a penalty in front of the posts which former Australian captain Stirling Mortlock had little difficulty in slotting home at the Wesley end of the ground to make it 0-3 in the visitors’ favour.

Leinster rallied through the industrious Brendan Macken whose break into the Melbourne half resulted in a penalty 12 minutes into the game which debutant out-half Mat Berquist opted to kick to the corner. From the resulting lineout
Leinster pressed but a spilled catch by Dominic Ryan metres from the try-line denied the hosts their opening points.

In the 24th minute Melbourne winger Cooper Vuna instigated a move which full-back Kingi finished off in the corner. Mortlock’s touchline conversion attempt fell short of the posts but it pushed their lead to 0-8.

From the re-start again Leinster signalled a strong intent with captain Rhys Ruddock leading the charge into the Melbourne 22.

With Berquist an assured presence at half-back Leinster looked to regain the iniaitive but it was his half-back partner John Cooney who launched Leinster’s first notable break when he cleverly kicked ahead on the half hour mark to the onrushing Fionn Carr but a cruel bounce of the ball denied Carr a certain five-pointer.

With their Blues’ tails up a try seemed inevitable and Cooney, Leo Auva’a and Mark Flanagan probed separately which led to a penalty and in the 38th minute Ruddock capitalised on the one-man advantage to crash over in the corner for Leinster’s opening try.

Berquist expertly converted to give the visitors a sender one-point lead but right on the stroke of half-time Melbourne second row Hugh Pyle broke free to touch down, with Mortlock’s conversion attempt falling short of the posts to make it 7-13 at the interval.

Summer signing Steven Sykes entered the fray after the break and Leinster gained the upper hand early on. Jamie Hagan and Heinke van der Merwe punched holes in the Rebels defence as the home side forced the Rebels on to the back-foot and eventually their pressure told with a superb scything Carr burst found right-wing Hudson who displayed impressive speed and strength to touch down under pressure in the corner after 52 minutes.

Berquist added the difficult conversion to give Leinster a slender but deserved 14-13 lead. With both teams opting to make a series of substitutions the game see-sawed, but Leinster deservedly edged a competitive contest, which saw a number of inexperienced players impressing, in front of a crowd of 3,520.