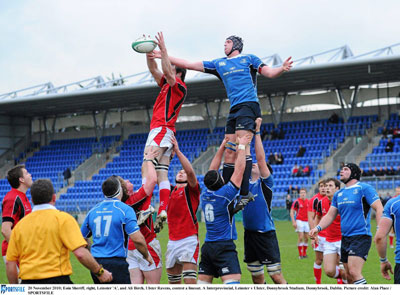 Leinster began brightly and Ian McKinley kicked the hosts into an 11th minute 3-0 lead with a penalty after a spell of good pressure. With Paul O’Donohoe probing alertly at scrum-half it looked only a matter of time before Leinster would strike and Eoin Sheriff came close four minutes later but he was denied in the corner at the Bective end.

Credit to Ulster who rallied and with their outside backs asking a lot of questions it was fitting that a break instigated by Tommy Seymour and centre Jonny Shiels with the ball eventually finding Chris Cochrane who crossed the line. Patrick Jackson’s conversion attempt fell wide of the upright.

Leinster bounced back moments later through Michael Keating after some good initial play by the pack, with Simon Shawe and Sheriff working tirelessly. Keating took a McKinley pass to burst clear under the posts and out-half McKinley slotted home the extras to make it 10-5.

As the half drew to an exciting close Cochrane again touched down, with Jackson adding the points, to give the visitors a 12-10 half time lead.

The Ravens began the second half where they left off and Shiels struck in the 50th minute followed by second-row Ian Henderson (56 minutes) in a lively six minute spell, with Jackson adding the points.

At 26-10 the game appeared over as a contest but Leinster fought back and McKinley’s 62 minute penalty reduced the deficit to 13 points with just under a quarter of the game remaining. But replacement Conor Gaston’s try five minutes put paid to a late rally and though Darren Hudson touched down late on after some bright play by John Cooney, the visitors emerged as deserving winners.