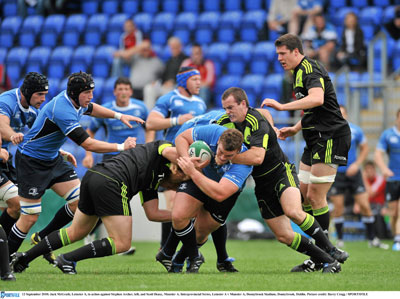 Speaking after the game, Leinster ‘A’ Coach Colin McEntee said: “It was a good competitive game and a typical early game in the season with a lot of guys getting their first run out. I think that we learned a lot from today and that’s one of the main purposes of this (fixture). It’s about how we react from this in terms of the small mistakes (that we made).

“There were a few changes, even though you prepare for such things, but with Ian McKinley being sick you end up reshuffling everyone and you lose your shape a little bit. We ended up having three guys in different positions. But there were some good cameos, John (Cooney) looked sharp at the breakdown and Rhys (Ruddock) needed that game and it was good to a get a trot out and get 40 minutes under his belt.

“We’ve just got to kick on from here. We face Newport away next in the British & Irish Cup and that will be another tough test.”

After a stop-start beginning from both sides it was the hosts who had the first real scoring opportunity, but Ian McKinley’s 11th minute penalty effort shaved the outside of the upright.

Leinster upped the ante and despite the efforts of Michael Keating and Paul O’Donohoe on separate occasions, it was Munster full-back Sean Scanlon who score the game’s opening points when he finished a well-worked move on 18 minutes. Out-half Scott Deasy’s conversion attempt fell wide of the posts, but the visitors took a 5-0 lead into the second quarter of the game.

Munster centre Troy Smith doubled his side’s advantage seven minutes later when he crashed over from close in and Deasy’s conversion made it 12-0. Leinster sprung into action and in the 32nd minute Michael Keating took an expertly weighted Brendan Macken inside pass to touch down at the Bective end.

Sub out-half Noel Reid added the points to reduce the deficit to five points, a lead which Munster into the half-time interval.

At 12-7 the game was in the balance but in the 52nd minute Deasy broke away on the halfway line and raced clear after fielding an intercept and he also added the points to make it 19-7.

A series of replacements gave Leinster a fresh impetus and scrum-half John Cooney and centre Brendan Macken linked well as the Blues sought to redress the arrears.

Macken punched an impressive hole through the Munster defence with a searing break but his effort was denied and there were impressive cameos from the likes of Rhys Ruddock and the industrious Cooney. But in the closing quarter Munster asserted their territorial dominance and sealed a 19-7 victory.