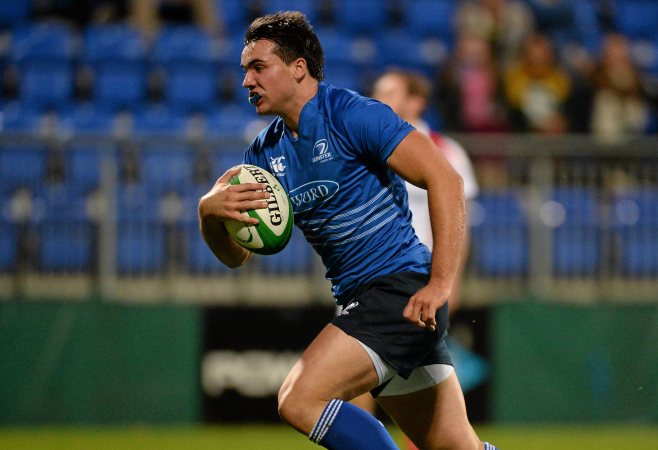 The Leinster Academy panel for 2014/15 has been announced. Six Leinster Academy graduates have received professional contracts from the province and will be part of the senior team squad for the new season.

Of the eight Year 1 recruits in the Leinster Academy panel for the 2014/15 season, seven appeared for the Ireland Under-20s team that reached the semi-finals of the 2014 Junior World Championship in New Zealand back in June.

Discussing the Academy roster for the new season with LeinsterRugby.ie, Leinster Academy Manager, Girvan Dempsey, spoke of the impact the new Academy recruits had in the recent Junior World Championship.

“They are really exciting players, they had big influences on the tournament and on the Irish Under-20s through the Six Nations. I think they’re a really good bunch and they’ve all come through our Sub-Academy programme as well and gained the benefits of that year.”

There are eight players in their final year with the Leinster Academy, including Jordan Coghlan who has had his time in the Academy extended by one year after a series of injuries last season.

“Jordan Coghlan, like Sam Coghlan-Murray last year, has had his Academy term extended by a year due to a series of lengthy injuries during his time at the Academy. His development was hampered and the precedent was there with Sam Coghlan-Murray who was in a similar situation in his Academy term. Sam had a number of injuries and illnesses and he missed out on big chunks of his development. Last year he played in the region of 26 games, was a prominent player for the A team in the British & Irish Cup, got recognised on the back of that, and got a development contract until the end of the year.”

“Jack progressed well last year and was rewarded with a senior contract,” said Dempsey of the former St. Gerard’s student.

Of the two remaining Year 3 Academy players, Conor Gilsenan and Andrew Boyle were both released. Gilsenan has since gone on to sign a professional contract with London Irish.

With pre-season now well underway for the Academy, Dempsey was pleased to report that his players are fit and hungry for the new season to begin, with many hopeful of impressing Matt O’Connor ahead of the pre-season friendlies against Northampton Saints and Ulster.

“Pre-season’s gone really well. They’ve all come back in good shape. Fitness testing the first week went well. They’ve all shown a really good appetite and hunger, and they’re looking forward to trying to impress Matt and the new coaches and hopefully get some game time during the pre-season matches against Northampton and Ulster.

Dempsey is also looking forward to the challenges of a new season that will see all six British & Irish Cup pool matches completed before the turn of the year.

Discussing the upcoming season with LeinsterRugby.ie, Dempsey said: “It’s exciting and challenging because it’s condensed. Our first game will be the first weekend in October. That will be an A interprovincial, the same weekend the seniors play Munster. Then we lead into three B&I Cup games: Plymouth, Jersey and the Welsh qualifier team. It’s challenging but it’s going to be exciting.”