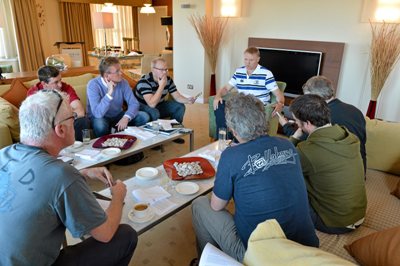 Conrad Dublin, one of Ireland’s leading luxury hotels, has announced a three-year sponsorship deal with Leinster Rugby. The five-star hotel, located on Dublin’s Earlsfort Terrace, has been appointed the Official Hotel to Leinster Rugby…

The luxury Conrad Dublin will become the venue of choice for Leinster Rugby meetings and events, whilst pitchside advertising for the hotel will be displayed at both Leinster’s homeground at the RDS and the 51,700 capacity Aviva Stadium, which plays host to selected marquee fixtures.

General Manager of Conrad Dublin, Martin Mangan said; “This six-figure deal is the biggest ever sponsorship for Conrad Dublin.  And, with Leinster Rugby at the top of their game as champions of Europe, we couldn’t be prouder to be supporting the team as they prepare for what we hope will be another successful campaign.  With the continued growth in popularity of rugby, we are confident that this sponsorship will resonate with our guests and help develop a strong identity for the hotel.”

Keira Kennedy, Commercial Manager, Leinster Rugby added; “Having a brand such as Conrad in our portfolio of sponsors is a great asset for the club.  They are a perfect match for Leinster Rugby as a name equally synonymous with style and success. Conrad Dublin’s location in the city centre, together with its proximity to both the RDS and Aviva Stadium puts the hotel in a great position to accommodate and host both travelling supporters as well as our loyal followers throughout the season. We are looking forward to a very successful partnership and rewarding our followers with some exciting promotions and benefits courtesy of Conrad Dublin, throughout the season.”

Many rugby supporters will be already familiar with Conrad Dublin as a great choice for luxury accommodation together with matchday food and drinks during the season.  A short walk away from the RDS, the hotel’s Alfie’s Bar, has, on many occasions, warmed up armies of supporters for Leinster home games.  Alfie’s has been refurbished in time for the new season, with the addition of a new outdoor terrace set to increase the venue’s popularity amongst supporters.

Martin Mangan concluded, “We like to associate Conrad with like-minded brands that exude a commitment to exemplary standards, and an identity and ethos in keeping with our unique definition of smart luxury.  With a huge and loyal following, an abundance of world-class players and a style of rugby that’s a joy to watch, Leinster Rugby was a natural choice for us.”

The five star Conrad Dublin is located conveniently off St Stephen’s Green and opposite the National Concert Hall on Earlsfort Terrace.  The hotel prides itself on providing luxury in a comfortable and classic setting and offers business facilities such as complimentary Wifi in all public areas, meeting space holding up to 350 delegates, a business centre, excellent food and beverage facilities, a private gym and secure underground parking.