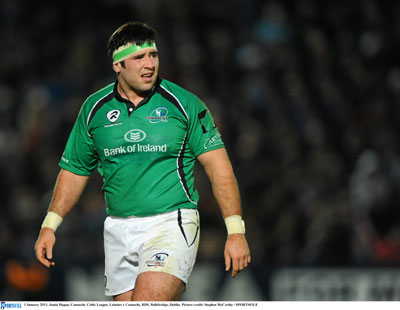 Meanwhile, Connacht tight-head prop Jamie Hagan has also signed a three-year deal and the Balbriggan man will return to the province of his birth this summer alongside Canterbury Crusaders out-half Matt Berquist who has agreed a one-year deal with a further option to extend.

Interestingly, both Sykes and Berquist (who chipped in with a late conversion) came up against each other in Sunday’s Super 15 clash in Twickenham which the Crusaders won 44-28.

Sykes, 26, has established himself as one of South Africa’s premier second row forwards in recent years but being uncapped by the Springboks means it is possible that he could qualify to play for Ireland at the end of his three year contract.

Sykes started his career with the Sharks in 2003, playing for the Under-20 side. Standing 1.98m tall and weighing in the region of 115kgs, the big lock forward quickly made a name for himself in Durban and earned his Currie Cup and Super Rugby debuts in 2005 and 2006 respectively.

The former South Africa Under-19 and Emerging Springbok player is determined to play top level rugby and he believes that moving abroad is the right decision for him, both in the short and long-term.

“For me I believe it is a good career and personal move – I want to play international rugby and it would be a fantastic honour to play for Ireland as well if it came about. Before any of that though I am really excited to play for Leinster. I really do believe it is the right move for me.”

Sykes has been an ever-present in the Sharks’ line-up in recent seasons. Deciding to leave King’s Park has certainly not been an easy decision for him. Speaking about his move he said he did not want to leave Sharks supporters with any doubts about his passion for the 2010 Currie Cup Champions.

“Of course it was not an easy decision to make, I don’t for one second want anyone to think I am unhappy here or unhappy at the Sharks; I love the Sharks! I have played over 130 games for the Union and loved every minute of it. However I believe that it will be very good for my rugby to make the move and I am looking forward to the experience of playing in European conditions week-in and week-out, learning about their way of playing – which I think will suit me.

“I remember sitting down after I signed the Leinster contract and reflecting on it – it is obviously a massive decision to make. I do believe 100% it is the right choice for me. I am really looking forward to the challenge!

“Leinster is a leading European club, regularly challenging for top honours, and I can’t wait to be involved. I think it will be great for me and my wife to get the experience of living there as well.”

Former Leinster and Ireland Youths prop Hagan, 23, has played 23 times for Connacht in all competitions so far this season and 46 (including 13 in the Amlin Challenge Cup) games in total since his move from Leinster in 2009. A former Leinster Academy graduate who was educated in Gormanston College, he weighs in at 125kg and stands tall at 1.90m.

Jamie Hagan said: “I am delighted to be heading back home to Leinster and I am looking forward to the new challenges that I will face. Everyone in Connacht (particularly Eric Elwood and Dan McFarland) has been very good to me over the last few years and I’m looking forward to pushing on from my experience in Galway to make an impact when I return to Leinster in the summer.”

Waipukurau born Matt Berquist, 27, joined the Canterbury Crusaders in 2010 having also played for Hawke’s Bay, Otago and Auckland. An accurate goal-kicker, he made his provincial debut in 2003 and has since gone on to play 67 times at provincial level, with a further 21 caps to date at Super 14/15 level.

Matt Berquist said: “I have always been keen to test myself in Europe and the Magners League and Heineken Cup competitions will certainly provide a real challenge. I am delighted to join an ambitious club who are on the up. Leinster have a strong reputation in New Zealand and I am excited by the opportunity to test myself in a new environment.”

Commenting on the moves, Leinster Coach Joe Schmidt added: “We are pleased to secure Steven’s signature, and this is a further welcome boost coming off the back of retaining some of our senior and up-and-coming players in recent weeks.

“Steven has gained a wealth of experience at Super 15 level in recent years and, at 26, we believe that his best years are still to come. He is an ambitious and talented player who is excited about joining the province.

“Jamie’s desire to return to the province of his birth after an impressive spell with Connacht over the last few years is another important acquisition for the panel. Our coaching team have been impressed by the level of his performances again this year and we believe that he has the potential to improve even further.

“Matt has been understudy to Dan Carter at the Crusaders this year, which limits any player’s game time a little, but he has proven quality and experience in the NPC and Super 15 and he will provide further competition for our established and up-and-coming out-halves.

“We are pleased to have secured all three players and I am sure that they will prove to be strong additions to the side over the coming seasons.”